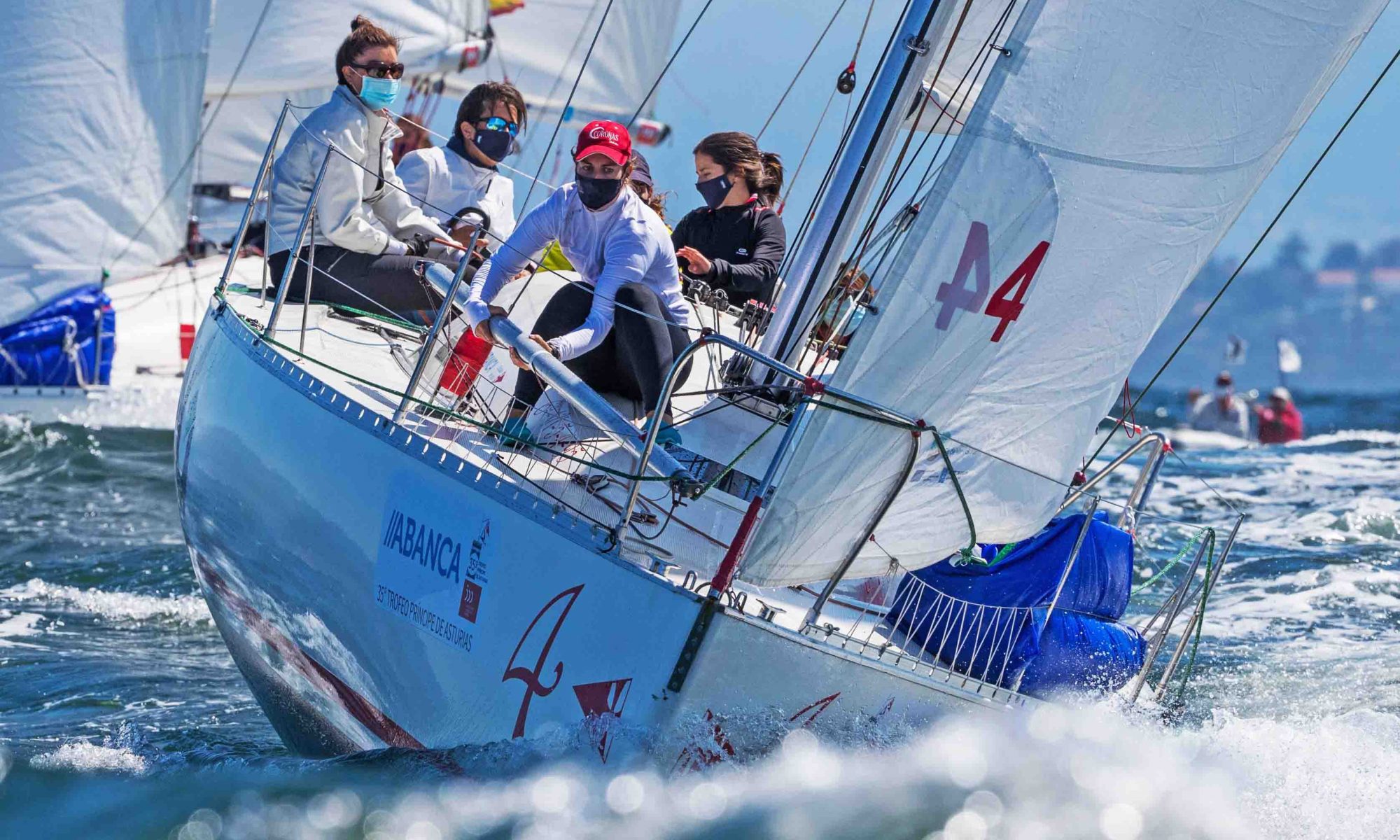 REPORT BY ROSANA CALVO, HEAD OF COMMUNICATION AT MRCYB

In this 2021, after more than 40 years of competition, the Galician A Two Championship , held at the beginning of the month, had its first Galician champions. For the first time in the history of the trophy , women were able to opt for a specific title for them, a distinction that was requested from the Royal Galician Sailing Federation by the Monte Real Club de Yates within the framework of its Women’s Sailing project. It is an initiative that, through different proposals, seeks to end the inequalities that girls and women have suffered in the world of sailing in particular and the nautical world in general. Some inequalities and injustices that go back centuries…

Not long before the Revolution there was a royal ordinance in France that prevented women from embarking on Crown ships. As in many other sectors of society, in the nautical world women were considered to be less intelligent and capable beings than men, and having one on board supposed -according to what they said- a clear ballast for expeditions. There were even those who, relying on an ancient seafaring superstition, claimed that women brought bad luck to ships, which is why they had to stay on land.

Luckily, already at that time there were those who did not want to accept these inequalities and dared to break the rules, even running the risk of being discovered and punished. Disguised as a man, the French botanist Jeanne Baret embarked, in 1767, on one of the ships that, under the command of Louis Antoine de Bougainville, would form the first Gallic expedition to circumnavigate the planet. Baret thus became the first woman to go around the world through its oceans, also bringing with her a collection of more than 6,000 species of plants (which are now kept in the National Museum of Natural History in Paris), which earned him the congratulations of King Louis XVI himself.

We will never know how many women have had to go to sea dressed as men over the centuries or how they managed to fool the sailors on board during the long months that the expeditions lasted, but the truth is that there were and that the Most of them do not appear in the history books.

Among those great women who have not received the recognition they deserve is the Galician Isabel Barreto de Castro . Born in Pontevedra around the year 1567, she was a pioneer in world navigation when she became the first admiral of the Spanish Navy. In 1595 she assumed command of the expedition that left for the Solomon Islands but, despite having a chronicler on board (the Portuguese Pedro Fernández de Quirós), little or almost nothing is known about the great chapter that this woman wrote in the era of the discoveries.

These are just two examples of the many that have gone virtually unnoticed in the history of navigation, in which the domain has been and continues to be clearly male. We had to wait until the 20th century to begin to see women occupying prominent positions on ships. The Russian Anna Ivanovna Shchetinina became in 1935, at the age of 27, the first female captain of the merchant navy.

In Spain, it was not until after the 1978 Constitution (which established equality before the law for men and women, without gender discrimination) that women were able to enroll, for the first time, in the nautical careers of the higher schools of the Civil Navy.

The Asturian Ángeles Rodríguez was the first student in 1979 and graduated as the first officer of the Merchant Navy in 1984. The Canarian Mercedes Marrero was the first captain in 1992, Idoia Ibáñez the first commanding captain, María Cardona the first engineer officer and Macarena Gil , the first woman to work as a port pilot, a profession in which until 2015 -basically until the day before yesterday-, only men worked.

The fact that in Spain women were not allowed access to nautical training until 1979 caused many of them to join the labor market very late and this is one of the causes, added to many others also related to discrimination ( such as the belief that women are less physically capable or prepared for the danger of the activity), that their presence in the maritime sector is much lower than that of men.

Despite being fully involved in the 21st century and all the advances experienced in recent decades, women are still a minority and They barely reach 2 percent of the almost one and a half million sailors that exist throughout the world , according to data from the International Labor Organization. They are not only few, but also rarely (they do not even reach 1 percent) occupy positions of high hierarchical rank.

The sea has remained for centuries linked to the figure of the man, who went out to fish while the woman stayed on land waiting, as a housewife or as a redeira, fishmonger, canner, marketer… in professions that were practiced outside of the sea (and had a much lower prestige), although they were closely linked to it.

In the most playful and sporty section, the one related to the sport of sailing, the balance also falls sharply towards the masculine side. Currently, the number of federated athletes in Spain exceeds 17,000, of which almost 14,000 are men, with the female presence reduced to just 3,500 athletes. They are barely 21 percent of the total , and the figure falls below 15 percent if we count those who participate in official regattas.

Although it is true that important steps have been taken towards equality in the sport of sailing, the truth is that, as was the case in the maritime sector, there are still very few women who have obtained worldwide recognition for their feats . Of most of them, only those really interested in the subject will know how to recognize their names and their achievements.

Women like the New Zealander Naomi James , the first who, in 1977, sailed around the world, solo and non-stop, also beating all speed records; or Dee Caffari, that 2006 did the same thing but in reverse, from east to west, along the considered “wrong path”, against the prevailing winds and currents on the globe; and that in 2009, after winning the Vendée Globe (the solo round-the-world sailing without stops or assistance), she became the first woman who, alone and propelled by the wind, hugged the planet in both directions.

Women like Tracy Edwards who, at just 23 years old, had to dodge the ridicule of all those who laughed at her for dreaming of an all-female team in the Whitbread Round the World Race (sailing around the world), in which managed to participate in 1989.

He fulfilled his dream aboard the Maiden. She did not win, but she became the first woman to receive the trophy for the best sailor of the year and managed to make 12 women the focus of the world nautical scene for months.

Her decision and her courage made it possible to build a door that would open up to four more times, thanks to four teams that took to the sea to show that women had a lot to say around the world. Tracy Edwards’ Maiden was the first all-female boat in what is now known as The Ocean Race, and was followed by Nance Frank and Dawn Riley’s Heineken (US Women’s Challenge) in 1993, Christine Guillou’s EF Education in 1997, Lisa McDonald’s Amer Sports Too in 2001; and Sam Davies’ Team SCA in 2014.

Since the first edition of the round the world race in 1973 there have been teams -few- made up solely of women, and women -increasingly- forming part of teams, the most notable case being that of Carolinjn Brouwer and Marie Riou , the first to proclaim themselves champions of a Sailing Tour of the World aboard the Dongfeng in 2018.

And so, although with ups and downs, the evolution of the presence of women in the world of sailing has not stopped there. Without going any further, in 2020 they participated in the Vendée Globe , the most demanding regatta in ocean sailing, 6 women, a record that had never been set before in this challenge. They were the English Samantha Davies, Miranda Merron and Pip Hare; the French Clarisse Crémer and Alexia Barrier, and the Franco-German Isabelle Joschke.

The progress in terms of equality is evident but the work is not – far from it – complete in the world of sailing. Proof of this are the multiple initiatives that, especially in recent years, have been launched through federations, clubs and teams. Women’s leagues, women-only crews, training and specialization activities designed especially for them… what is sought is to give women a greater role in a sector that has historically relegated them to a secondary position .

The Women’s Sailing project of the Monte Real Club de Yates de Baiona is also part of this struggle, thanks to which an entirely female team was formed to participate in the main regattas of the Galician Rías Baixas, the Royal Galician Sailing Federation was able to create a specific prize for women in the Galician Two-handed Championship, sailing activities were organized specifically for women, will be held the 25th anniversary of the Ladies Cup and several more initiatives are expected to be launched in 2021.

From Monte Real we believe that the woman-sea binomial continues to need support and encouragement, that the female presence in the world of sailing needs and deserves to continue making its way, and that this will only be achieved through everyone’s commitment to promoting the sport egalitarian. The sails are already hoisted, all that remains is to fill them with wind.

It is a report by Rosana Calvo, head of communication at the MRCYB 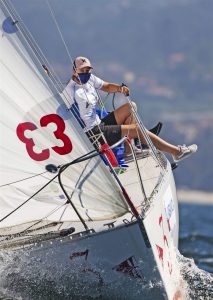