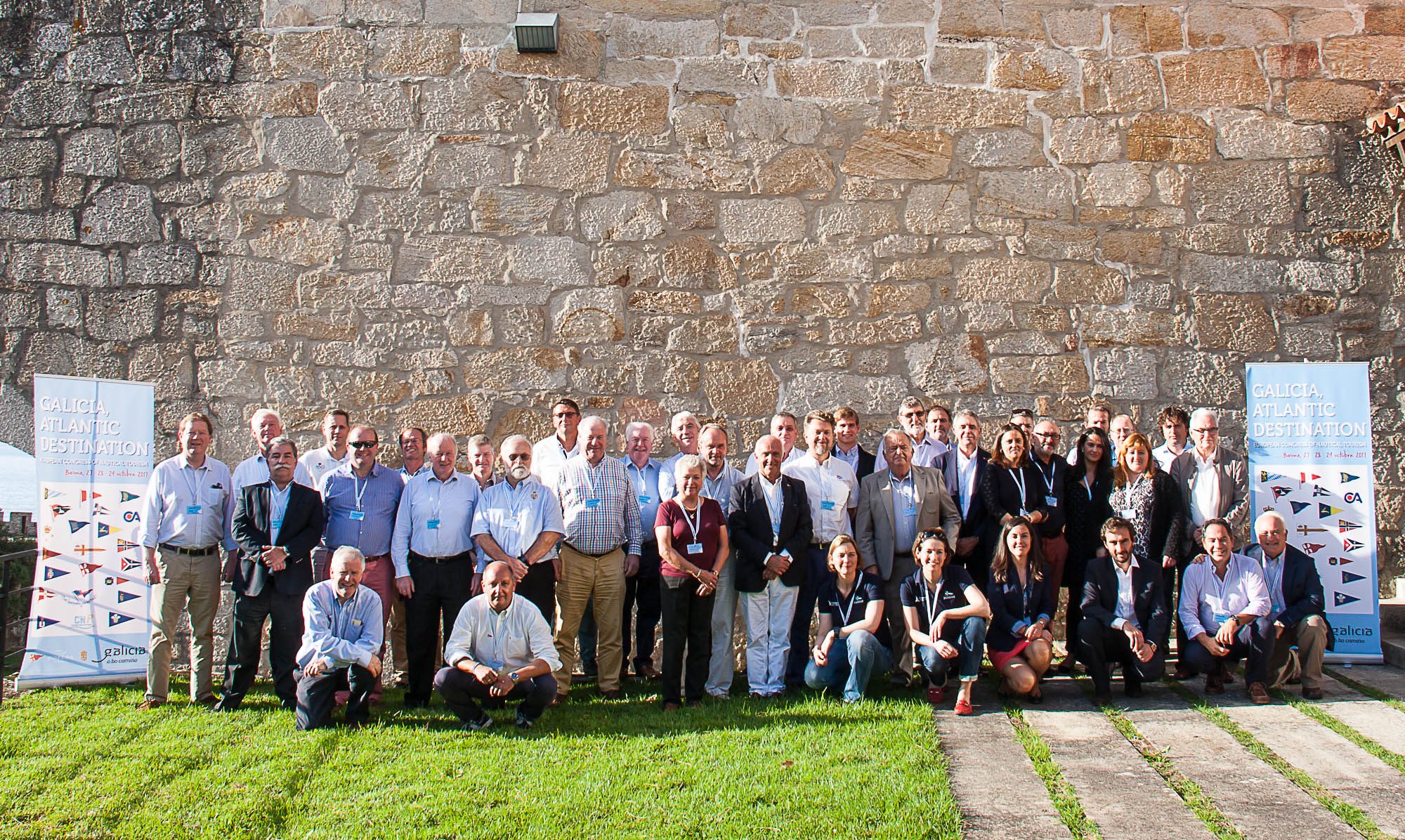 · The congress travels to the Arousa estuary tomorrow, Saturday, to take a tour of the estuary before returning to Baiona for its closing ceremony

Baiona, October 27, 2017.- The Parador Nacional de Baiona hosted this Friday the first day of the European nautical tourism congress Galicia, Atlantic Destination , in which representatives of twenty nautical clubs and associations from the old continent discuss the situation and future challenges of the sector.

In the inaugural session, which included several presentations, round tables and workshops, the attendees highlighted the improvements registered in the ports and marinas of Galicia over the last few years, and agreed to point out the great potential that the community has to attract visitors from all over Europe.

But not everything was praise, since some problems were also put on the table, mainly related to the language and air connections. The difficulties in reaching Galicia on direct flights from many of the countries of origin of possible transits and the fact that in some marinas the staff barely speak English were noted.

Other improvement actions that were presented at the congress have an impact on the need to implement complementary infrastructures and services for ports and marinas; and carry out a better dissemination of tourist proposals in order to reach the greatest number of people possible.

Europe in the spotlight

If the authorities in charge of opening the Galicia agreed on something, Atlantic Destination was the need to promote the great potential of Galicia’s nautical tourism throughout Europe, with the aim of turning it into a place of reference for sailors.

The director of Tourism of Galicia, Nava Castro, in charge of inaugurating the Galicia, Atlantic Destination , pointed to the old continent as one of the main markets with which Galicia has to work, since, as he assured, 8 out of 10 boats that navigate the Galician estuaries come from different European countries.

The president of Portos de Galicia, José Juan Durán, also influenced this idea, speaking of the loyalty of the traffic they receive from Europe as one of the objectives of his department. “Galicia – he said- has achieved that the nautical facilities receive a greater number of visitors each year, and the effort must now focus on more qualitative than quantitative aspects”.

On behalf of the Monte Real Yacht Club, which organizes the event in collaboration with Turismo de Galicia, Portos de Galicia and the Baiona city council, its president, José Luis Álvarez, intervened. In his speech he invited all the attendees to get to know the attractions of our coast, among which he highlighted the fact of having “navigable estuaries throughout the year, a strategic position for transits, and unparalleled people, culture and gastronomy”.

Mini-cruises through the estuaries and strategies for regional nautical development

The representatives of the twenty nautical clubs and associations from all over Europe that attend the Galicia, Atlantic Destination were able to learn first-hand about two of the proposals that seek to promote nautical tourism in Galicia: the mini-cruises through the estuaries and the European Ecodestin project.

The president of the Galician Association of Nautical Activities (Agan +), Manuel Soliño, was in charge of explaining the mini-cruises through the estuaries. They are a series of navigation itineraries that link various routes with sectors of tourist attraction such as culture, heritage or oenology. The offer includes six routes through the Galician estuaries by ferry-catamaran or sailboat, with tours of areas such as the Arousa estuary, the Atlantic Islands or the fishing villages of the Vigo estuary, among others.

The Ecodestín project, presented by the manager of Estratexia Plus, Antonio Monteagudo, follows the example of development of the fjords in Norway and seeks to make the territory more attractive by promoting and developing the cultural heritage linked to the estuaries, rivers and coast of the Galicia Euroregion – North of Portugal. With European funds, the ports will be able to increase their transit docking capacity, make them more accessible and reinforce them with technology.

The congress moves tomorrow to the Arousa estuary

After the opening day held this Friday at the Parador Nacional de Baiona, the Galicia, Atlantic Destination will travel to the Arousa area tomorrow for a tour of the estuary.

The visitors, from Germany, Belgium, Denmark, France, Ireland, the Netherlands, Portugal and the United Kingdom, will embark at the port of Cabo de Cruz, in Boiro, to sail to the island of Sálvora, included in the Maritime-Terrestrial Park of the Atlantic Islands of Galicia.

The islands of Noro and Rúa, the archipelago of Guidoiro, and the islands of Areoso and Arousa will be some of the other points that will be visited on the second and last day of the congress. A tourist train route through Vilanova de Arousa and a visit to the Valle Inclán House Museum will put an end to the meeting of European nautical clubs and associations. 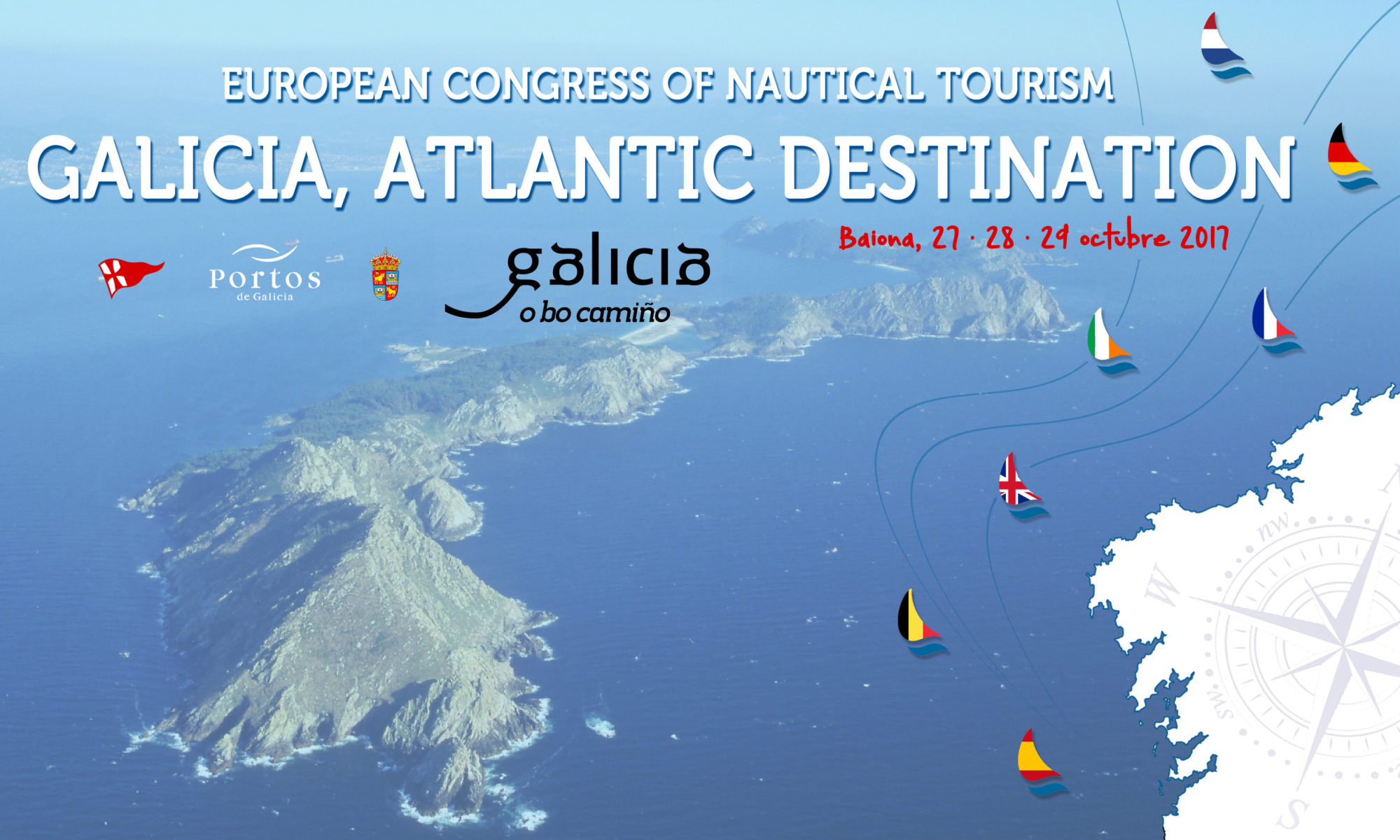 GALICIA, ATLANTIC DESTINATION is the first European nautical tourism congress to be held in the Galician autonomous community. It seeks to address the current and future challenges of nautical tourism, paying special attention to the situation in Galicia.

GALICIA, ATLANTIC DESTINATION is the first Summit focused on nautical tourism at European level that will be held in the Galician region. It will address the current situation and future trends of the nautical tourism paying special attention to the situation of this field in Galicia.

GALICIA, ATLANTIC DESTINATION is the first summit focused on nautical tourism at the European level that will be organized in the Galician region. The summit will be focused on the tableau current and future trends of tourisme nautique en veillant in particular to the situation of this sector in Galicia.

GALICIA, ATLANTIC DESTINATION is promoted by the Xunta de Galicia through the Galician Tourism Agency, Portos de Galicia and the Monte Real Yacht Club. Representatives of the main nautical clubs and associations in Europe, as well as journalists from different countries, will participate in the summit. The event will have the collaboration of the Concello de Baiona, the municipality that hosts it.

GALICIA, ATLANTIC DESTINATION is promoted by Xunta de Galicia thanks to the support of Agencia de Turismo de Galicia, Portos de Galicia and Monte Real Club de Yates. The summit will count on the participation of representatives of the most relevant yacht clubs and cruising associations in Europe, as well as specialized press officers coming from different countries. The event will be organized in collaboration with the city council of Baiona, a municipality that will host the Summit.

GALICIA, ATLANTIC DESTINATION is promoted by the Xunta de Galicia thanks to the support of the Agence de tourisme de la région galicienne, Portos de Galicia and Monte Real Club de Yates. The summit complies with the participation of representatives of the most relevant yacht clubs and the association of croisières d’Europe, as well as the press specialized in sales of different countries. The event will be organized in collaboration with the Mairie de Baiona, the municipality that opens the summit .

GALICIA, ATLANTIC DESTINATION will be held during the days of Friday 27, Saturday 28 and Sunday 29 October 2017.

GALICIA, ATLANTIC DESTINATION will be held on Friday the 27 th , on Saturday the 28 th and on Sunday the 29 th October.

GALICIA, ATLANTIC DESTINATION will include the participation of a group of experts in nautical tourism and public representatives of the tourism areas who, with their participation in several round tables, will present the current situation of the sector and the tourist potential of Galicia to attract sailors from all over Europe. Specialized journalists from different parts of Spain and Europe will also be present.

GALICIA, ATLANTIC DESTINATION will count on the participation of a panel of experts on nautical tourism and representatives of the public Administration in the tourism field. The experts will share, during the development of different round-table discussions, relevant content on the current situation of the nautical tourism and tourism potential of Galicia addressed to attract sailors from all Europe. In addition, specialized journalists from different locations in Spain and Europe will attend the event.

With 1,700 kilometers of coastline, Galicia is a maritime community par excellence, a port of passage and a stopover point for a large number of vessels that travel to the Mediterranean each year from northern Europe. With 72 coastal municipalities, some of the most important ports in Spain, hundreds of navigable kilometers and locations of special interest for maritime activities, Galicia acquires a strategic position to attract a large percentage of European nautical tourism.

With 1,700 km of coastline, Galicia has a privileged maritime location that offers several transitory ports and scale points to a high number of sailing boats that, each year, travel to the Mediterranean coming from the north of Europe. Galicia has 72 coastal municipalities, among which, there are some of the most important ports in Spain. With hundreds of kilometers suitable for navigation and locations of special interest for the maritime activities, Galicia has acquired a strategic position to attract a high percentage of the European nautical tourism.

GALICIA, ATLANTIC DESTINATION will be attended by representatives of the main clubs and nautical associations in Europe, whose sailors account for 78 percent of the ships that transit the Galician coast each year. Journalists from the different invited countries will also be present.

GALICIA, ATLANTIC DESTINATION will be attended by representatives of the most significant yacht clubs and cruising associations of Europe that represent the 78% of the sailing boats that transit each year along the Galician coast. Journalists coming from the invited countries will attend the event.

GALICIA, ATLANTIC DESTINATION will be integrated by the representatives of the most relevant yacht clubs and associations of croisières that constitute 78% of the boats that travel by the coast of Galicia. Different journalists in venant des pays invited were present at the event.