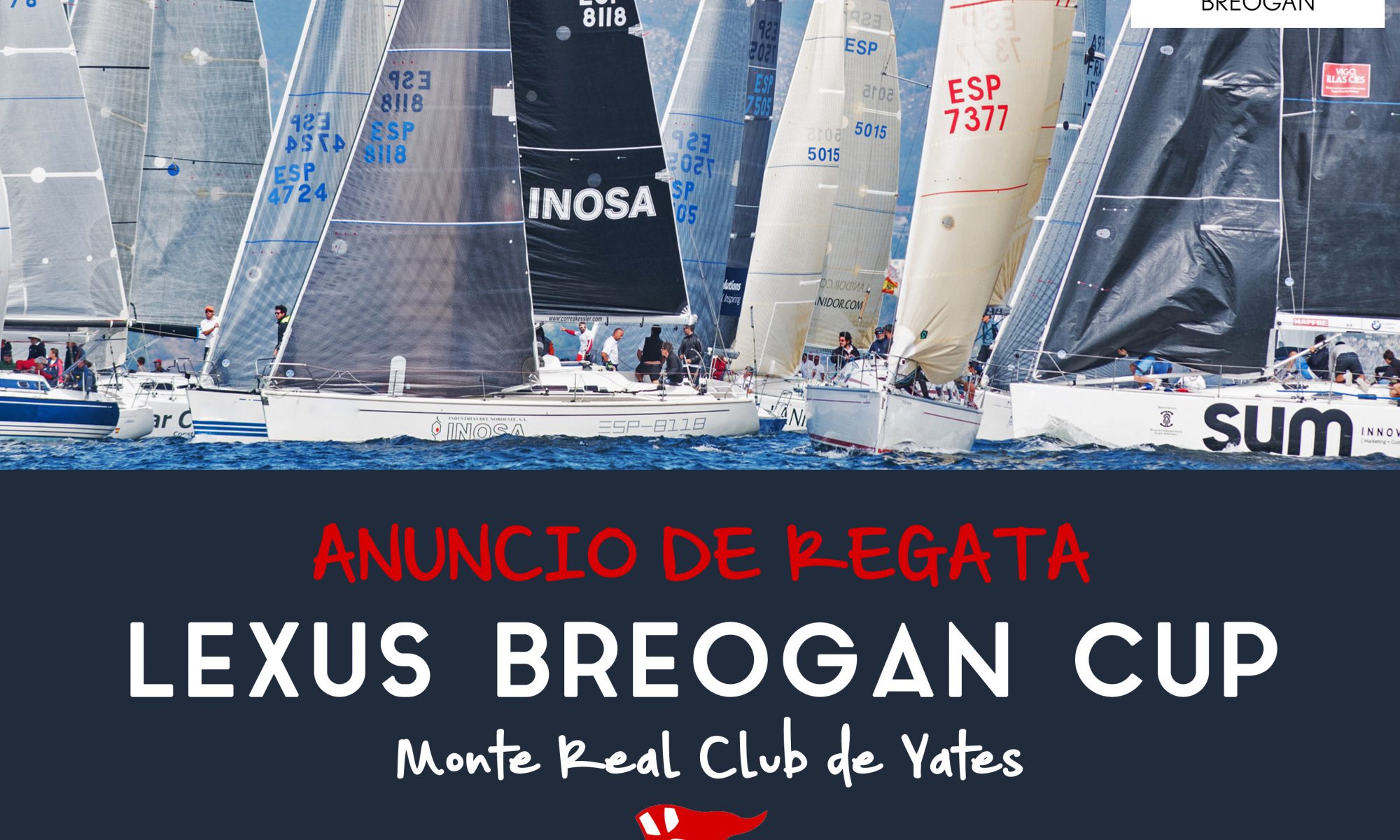 The Monte Real Club de Yates and the Club Marítimo de Vigo organize the LEXUS BREOGAN CUP for ORC cruises through the “against-the-clock” time compensation system, which will be governed by:

a) WS Sailing Regattas Regulations 2017-2020 (RRV)
b) RFEV prescriptions.
c) The Cruise Technical Regulations (RTC) in force
d) The IMS-ORC Measurement and Habitability Regulations
e) WS 2017-2020 Mandatory Security Elements (OSR) in Category 5
f) This Notice of Regatta and the Instructions-Operation of the Regatta.

Participants may display advertising in accordance with the provisions of World Sailing Regulation 20 and the prescriptions of the RFEV to said regulation.
In accordance with World Sailing Regulation 20, participants may be required to display advertising on the forward 20% of the hull on each side of the boat and on the sides of the boom, as well as possible advertising pennants on the backstay of each boat. All this would be provided at the regatta office once your registration is confirmed.
Modifications to the stickers provided by the Organizing Committee are not allowed.
The Monte Real Club de Yates reserves the right to demand the elimination or substitution of any type of advertising, message or image displayed during the celebration of the event of the boats or the equipment of their crew members, which does not comply with the moral and ethical standards of general acceptance (Regulation 20 of the World Sailing) or contravene the interests of the organizing club. This includes holding the races on the regatta course, in the club’s facilities or while at the disposal of the Regatta Committee.
The owner or skipper of the boat with advertising will be asked to indicate or show the type of advertising that will be displayed during the celebration of the regatta, for the approval of the organizing committee.
The participating owners and crews grant their authorization to the MRCYB so that any photograph, image or video of people or boats taken during the days of the regatta may be published in any medium, such as television advertisements, editorial comments, information, advertising , etc.

3.1 Participants must meet the eligibility conditions reflected in Appendix 2 of the RRV and in the prescriptions of the RFEV to said Appendix. Participants of nationality or legal residence in Spain must be in possession of the State Sports Federation License for the year 2017.
3.2 Any single-hull sailing cruiser with a minimum length of 6.49 m may participate in this regatta. and with an ORC International or ORC Club Measurement certificate valid for the year 2017. Vessels without a Certificate will also be admitted, which will be assigned that of a similar vessel but penalized with a minimum of 5% in its GPH, not admitting claims on this point. Vessels with a GPH greater than 800 sec./mile will not be accepted. The classification will be unique and in real time, with all the boats grouped together.

The philosophy of a regatta using a “against-the-clock” type of time compensation system is that, starting from a type of route to choose based on the wind and sea conditions (three will be communicated to the participants, of which the Race Committee Regattas will opt for one of them, at the moment of raising the attention flag of the first start), time compensation tables will be established, in such a way that each registered boat will take the start at the moment that corresponds to its turn, logically from smaller to larger boat size.

5.2) The Organizing Committee reserves the right to admit pre-registrations received after the specified deadline.
5.3) The owner or person in charge of each boat must submit along with the registration:
Photocopy of the Certif. Measurement ORC 2017 if you have it and want it to be applied
Photocopy of the Title of the Skipper to be able to govern the boat
Advertising Permit if you have any exposed
Current insurance policy, which covers civil liability (harmful to third parties and goods), or extension of coverage of civil liability and damage to third parties up to a minimum amount of 330,556.66 euros

On the morning of Saturday, November 11, a commemorative t-shirt will be delivered courtesy of ABANCA and LEXUS BREOGAN to the duly registered crew members of the boats, as well as the list of registered and the departure procedure, at the Club Secretariat.

The first start will have its warning signal at 15:00 and the others will follow from the slowest to the fastest boat according to the start procedure sheet. The award ceremony will be held at the Monte Real Club de Yates at seven in the afternoon, at a reception courtesy of COREN, BONILLA A LA VISTA, TERRAS GAUDA, COCA COLA and MARTIN MILLER GIN.

They will be available to participants from 10:00 on November 11, at the Regatta Secretariat.

All participants in the Regatta do so at their own responsibility and risk. The Organizing Committee or any person or body involved rejects any responsibility for loss, damage, injury or inconvenience that may occur to people or things, both on land and at sea, as a result of participation in the participation covered by this Notice of Race .

Attention is drawn to Fundamental Rule 4, DECISION TO RACE, of part 1 of the RRS which states “it is the sole responsibility of a boat to decide whether to participate in a race or to continue racing”.

MODIFICATION OF THE NOTICE OF RACE

The Organizing Committee reserves the right to modify this Notice of Race due to force majeure.

A prize will be awarded to the absolute winner, as well as to the four classified below. Prizes are created for the best boats in the categories that are created: regatta, cruiser, monotype J80, monotype J70… at the sole discretion of the Regatta Committee.

Each boat in the unique ranking will be assigned a score: 1, 2, 3, and so on. Each Club will add the points of its two best boats. The Club with the fewest points will be the WINNER OF THE GRAND VANGUARD PRIZE, consisting of a set of buoys (6 units) for the Sailing School of their Club.

All the owners of the participating boats will receive a CASE COURTESY OF TERRAS GAUDA during the prize distribution.

The boats formally registered in this regatta that do not belong to the MRCYB fleet, will have a free mooring or anchoring place (mooring under the exclusive responsibility of the owner or skipper) reserved in the MRCYB during the regatta days and from Saturday 4 to on Saturday November 18, 2017.

Before the attention signal, the route number will be indicated. (CHANNEL 69) and through the corresponding CIS number.

– Depending on the circumstances, A ROUTE DIFFERENT FROM THOSE SET FORTH BELOW MAY BE GIVEN VERBALLY VIA RADIO.