Portuguese victory at the premiere of the Infinitus Rent Trophy 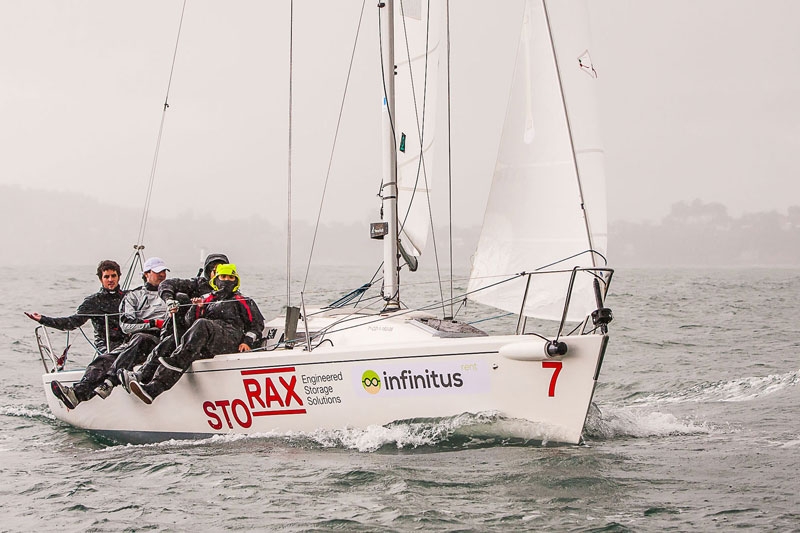 · The Monte Real Yacht Club Winter League lived up to its name and offered a typical winter day with leaden skies, cold and rain

The Miudo of the We Do Sailing club, skippered by the Portuguese Afonso Leite, scored the first podium of the Infinitus Trophy this Saturday in Baiona after winning on the opening day of the championship organized by the Monte Real Yacht Club.

The Winter League of the Baiona club lived up to its name and presented itself to the J80 fleet with a typical winter day, with leaden skies, cold and rain. Despite the unfavorable conditions, the sailors came out wanting to make their debut in the first regatta of the year, and the committee forced, with considerable difficulty, the celebration of two tasks, in which a very shifty and low-intensity wind prevailed.

With the two courses shortened in the second passage through the windward buoy, the fleet achieved very different results. The first heat was won by Fernando Yáñez’s Cansino, skippered today by the former two-time Galician vaurien champion, Castor Alonso. In the second baton the crew lost some steam and finished fourth, finally falling to second place overall.

The victory of the second round was signed by the Portuguese Miudo, with a victory that, added to the fourth place achieved in the first round, gave them the provisional gold of the championship. The bronze went to the J80 La Galera, skippered by Rosario García, from the Real Club Náutico de A Coruña.

Miguel Lago’s Virazón, who returned to the J80 competitions in Baiona after several months racing in the 6m class, is in fourth place and very close to him, just one point away, is Juan Luis Tuero’s Luna Nueva .

Completing the Monte Real Winter League classification are the Meltemi by Guillermo Blanco, the Pazo de Cea by María Campos, the Namasté by Luis de Mira and the Marina Real by Joaquin Cobelo. Javier de la Gándara’s Okofen, who had finished the tests in second position, fell to tenth place after the resolution of a protest against him.

The Infinitus Rent Trophy returns to Baiona at the end of the month, with the second day of tests on Saturday, January 25.