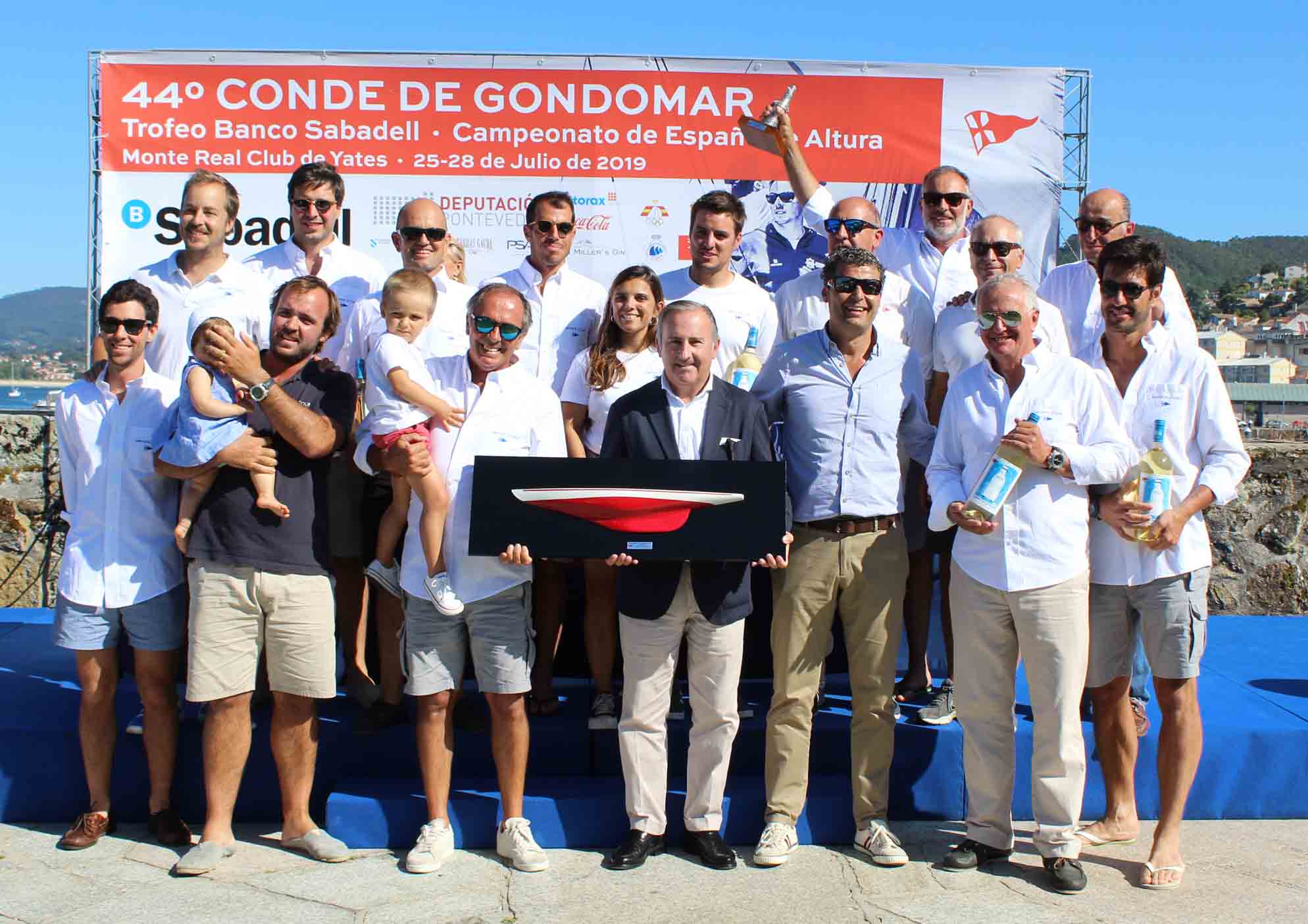 · Five years after he achieved his first victory at the Conde de Gondomar with Fifty, the Portuguese owner and skipper is crowned again

· The Yess Too made a triple by taking the prizes to the winner of the general, of the STORAX ORC 1-2-3 class and to the winner in real time of the Carrumeiro

· In the PSA RETAIL ORC 4-5 class, Luis Pérez’s Balea Dous won and removed the thorn from the previous edition in which he finished second

· The next appointment with the regattas of the Monte Real Club de Yates is the Príncipe de Asturias Trophy that will be held on September 6, 7 and 8

The 44th Count of Gondomar – Banco Sabadell Trophy , disputed over the last four days in Galicia, came down this Sunday with the celebration of a test that turned out to be decisive and the awarding of prizes to the winners of the competition.

The regatta committee had scheduled two windward-leeward sleeves to close the trophy but the weather, which was the protagonist during the first two days, once again made itself felt. The wind was slow to appear at the Cíes anchorage, the scene of the competition, and the sailboats had to keep floating for two hours before being able to launch themselves again for the championship.

In dispute, a route between buoys of just over four miles for the big boats and a little less for the smaller ones and one designs, which the crews had to face with a west wind of about 6 knots on average, which never passed of the 8 It was a complicated test, very technical, with difficulties to find the best tacks and even to advance astern with the tide going out.

With very different characteristics from the two coastal races that opened this edition of the Conde de Gondomar, the skippers’ skill in advancing as quickly as possible in the barlosotas was decisive when it came to defining the final podiums, which reaffirmed the bets of many but which also left some last minute surprises.

In the Storax ORC 1-2-3 class, the Yess Too of the Monte Real Club de Yates, armed and skippered by the Portuguese Rui Ramada, achieved a triple victory in the competition, taking the award to the winner of the Carrumeiro in real time, the first prize of his class and the overall winner, which he received from the general manager of SabadellGallego, Pablo Junceda.

This is the second victory at the Conde de Gondomar that the Portuguese owner has achieved since he began to participate in the competition ten years ago. In 2014 he achieved victory with the Fifty, one of the boats that gave Ramada the most satisfaction, with which, among other trophies, he won the Prince of Asturias on several occasions.

The second and third place of the Conde 2019 went to two of the most successful boats in the history of the competition, both from the Real Club Náutico de Vigo: the Aceites Abril of the Pérez Canal brothers, who finally could not sign their fourth consecutive victory; and José Luis Freire’s Pairo 8, the best in this Sunday’s test.

In the Psa Retail ORC 4-5 competition, the Balea Dous of Luis Pérez, of the Real Club Náutico de Rodeira, managed to get rid of the thorn of the previous edition, in which he came second, climbing this Sunday to the top of the podium .

La Burla Negra by Juan José Martínez, from the Club Náutico Castrelo de Miño; and Luis García Trigo’s Unus, with a pendant from the Monte Real Club de Yates, were the winners of the silver and bronze medals in the competition.

In the Rías Baixas J80 class, the great performance of Santiago Estévez’s Cunichán in the last race in the competition, in which he was the winner, allowed them to climb positions to the first position, causing Juan Luis Tuero’s Luna Nueva to fall.

The Spaniard, who had been the leader since the beginning of the forty-fourth edition of the Conde de Gondomar, fell to second place and the Maija of José Luis Pérez, also from Monte Real Club de Yates, was in third place.

In the Martin Miller Figaro class, Bouvento and Ladeira were the two boats that maintained the strongest bets throughout the competition in the game for the final victory, which ended up being won by Ladeira, skippered by Vice-Commodore of Monte Real, Genoveva Pereiro. .

Fernando Rey’s Bouvento came second and Víctor Fernández’s Tutatis, the third boat in discord since Thursday, failed to rise from the third position that it held during the first two days and in which it reaffirmed itself in the final stage.

At the awards ceremony held this afternoon in Baiona, which put an end to the competition, the general manager of SabadellGallego, Pablo Junceda; the mayor of Baiona, Carlos Gomez; the delegate of the Xunta de Galicia in Vigo, Corina Porro; the deputies of the Provincial Council of Pontevedra, Iria Lamas and Raquel Giráldez; the director of private banking and the director of professional groups at Banco Sabadell, José Celada and Manuel Prol; the manager of PSA Retail Vigo, Daniel Martín; and the vice president of the Monte Real Yacht Club, Alejandro Retolaza.

THE NEXT APPOINTMENT: THE 34TH PRINCE OF ASTURIAS TROPHY

The Count of Gondomar serves as a prologue to another of the historic regattas of the Monte Real Yacht Club, the Príncipe de Asturias Trophy, which in 2019 celebrates its thirty-fourth edition and will be held at the beginning of September, on the 6th, 7th and 8th. . It will include again, one more year, the HELLO! Ladies Cup.

CHAMPION OF THE 44TH COUNT OF GONDOMAR

CLASSIFIED IN THE SPANISH HEIGHT CHAMPIONSHIP

WINNER OF THE CARRUMEIRO STAGE IN REAL TIME