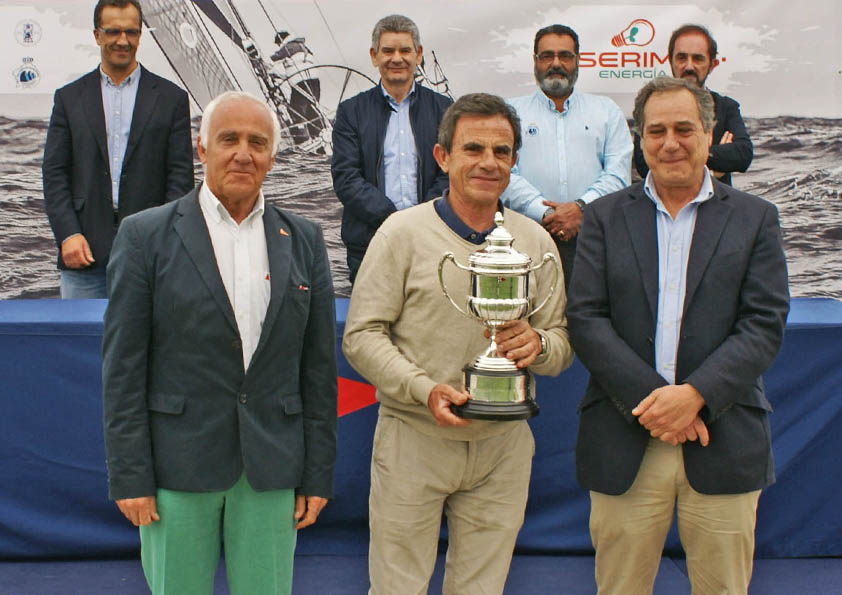 Javier de la Gándara from Vigo added this weekend a new title to his prolific career as a sailor by winning the Galician Two-handed Championship, held in the Rías Baixas under the organization of the Monte Real Yacht Club and the Royal Galician Federation of Candle.

He did it hand in hand with Diego Fernández, one of his regular crew members on the Okofen , with whom he won bronze in the J80 Spanish Championship last May, and with whom he sealed the competition on this occasion, taking all three titles in dispute.

In addition to becoming the new Galician champions of A Dos, they won the gold of the Inserimos Trophy and the ciborium of the IV Rafael Olmedo Memorial, an award they received from the hands of Rafa Olmedo, son of the one who was president of Monte Real for more 40 years old, to whom the trophy was dedicated.

The Okofen took the victory after compensating for the times of a regatta in which the fastest boat was the Clínicas Gaias of the Real Club Náutico de Portosín. Skippered by José María Peinó and crewed by Ramón Quiroga, the sailboat completed the more than 35 round-trip miles between Baiona and the Camouco Lighthouse, in the Ons archipelago, in just over 6 hours.

He was the first to cross the finish line of a regatta that started punctually at eleven o’clock in the morning from the interior of the bay of Baiona, with a scarce wind that gradually dropped and complicated navigation for the crews in the area of Carallones. As the test progressed, the wind increased in intensity, even reaching 14 knots at times, and the sailboats were able to move forward with ease.

After the Gaias Clinics , the second to cross the finish line was the MBA Atlántico , owned by Rui Ramada and Afonso Leite, another of the outstanding boats in the competition. He was the fastest in the first few miles of the route and remained in the lead for much of the route, which allowed him to take silver in the A Two 1 category. The bronze in this class went to the SND Cormorán , owned by Pablo Cabello and Francisco Javier Martínez.

In class A Two 2 stood on the podium the Ay Carmela de Juan Martínez Pazó and Rafael Martínez, from the Liceo Marítimo de Bouzas; the Juliana by Deep Blue by Vicente Cid and Javier Miguez, from the Real Club Náutico de Vigo; and the Q Talent of Javier Rey and Jorge Justo, from the Monte Real Yacht Club; who were first, second and third respectively.

In the real-time competition of the J80 monotypes, the fastest was the Okofen by Javier de la Gándara and Diego Fernández; and the second and third position were shared between the Marías de Manuel María Cunha and Diogo Pontes, from the Monte Real Yacht Club; and The Galera of the Real Club Náutico de A Coruña, manned by Jaime García and José María Calviño.

WINNERS OF THE GALICIAN CHAMPIONSHIP OF TWO

WINNERS OF THE INSERIMOS TROPHY