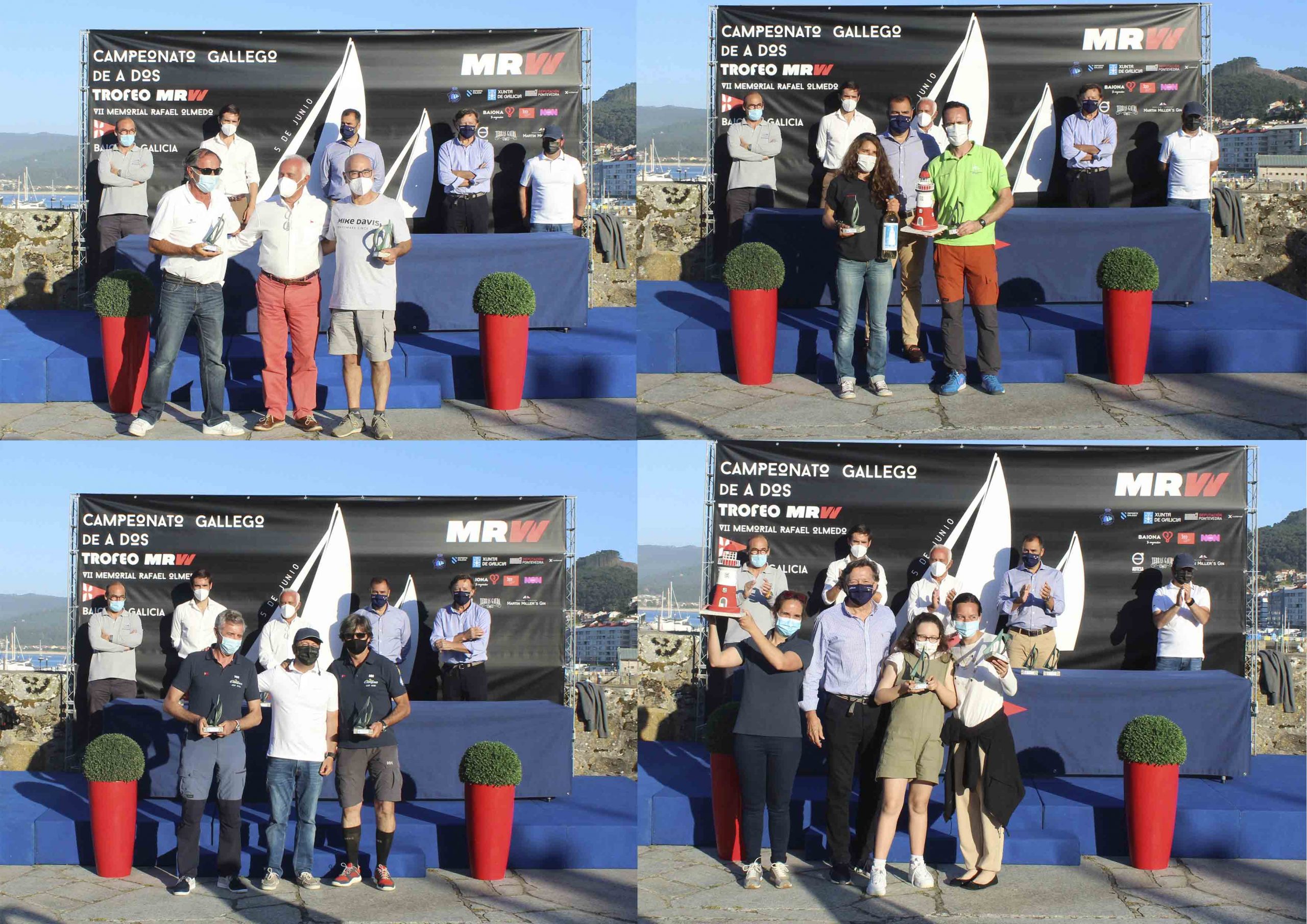 · In the women’s section, the best crew was formed by Marta Ramada and Dunia Reino aboard the Miudo

· Among the mixed sailboats manned by a man-woman couple, the Bon III of Víctor Carrión and Ana Sardiña prevailed

Galicia already has new Champions of A Two in all the categories put in contention in this 2021. The MRW Trophy, held this Saturday in the Rías Baixas under the organization of the Monte Real Yacht Club, revealed the names of those who, as of today, are officially the best couples of sailors in Galicia.

The team formed by Rui Ramada and Pedro Serodio aboard Yess Racing won the competition in the ORC class, in which 19 boats competed, taking the title of Galician Champion in that category. In the J80 class, the new Galician A Dos champions are Fernando Yáñez and Ignacio Sánchez Otaegui after beating the 18 contenders for the one-design title on board the Cansino.

This year, the novelty of the regional test was that the Royal Galician Sailing Federation created, at the request of Monte Real, two new distinctions within the framework of the championship, one for women and the other for mixed.

In the female section of J80, the best crew was formed by Marta Ramada and Dunia Reino aboard the Miudo; and among the mixed sailboats, manned by a couple of men – women, within the framework of the ORC class, the team of Víctor Carrión and Ana Sardiña, from Bon III, prevailed.

The route of the Galician Two-Handed Championship for this 2021 was a route from Baiona to the vicinity of the island of Ons, where the sailboats had to turn around the Camouco Lighthouse before returning to Baiona. Faced with the possibility that the intensity of the wind would drop, the regatta committee decided to shorten the initially planned route and place the finish line in the south of the Cíes archipelago, on the islet of Viños.

There were about 27 miles of navigation that offered multiple scenarios to the crews. The 37 sailboats left with a fair wind, 5 knots from the west, but enough to reach the south of Cíes, where the worst section of the entire route awaited them. There, a calm one left virtually the entire fleet stalled for a long time, but once the wind started to come in, things only got better.

From that area south of Cíes to the Camouco Lighthouse in Ons, the crews climbed at a good pace, driven by about 11-12 knots and the sea like a plate, and the descent again to Cíes, where the finish line was placed, it was even easier, with 12-13 knots and peaks up to 15.

In addition to the regional A Dos titles, the competition paid tribute to the former president of the Monte Real Club de Yates for more than 40 years, Don Rafael Olmedo Limeses; and decided the winners of the MRW Trophy in the ORC, ORC OPEN, Fígaros and J80 categories.

Regarding the MRW Trophy, the winners of the different classes were the couples formed by Rui Ramada and Pedro Serodio (ORC), Javier Rey and Jorge Justo (ORC OPEN), Alejandro Retolaza and Roy Alonso (FÍGARO); and Fernando Yáñez and Ignacio Sánchez Otaegui (J80).

Once the regatta was over, the gardens of the Monte Real Yacht Club hosted the awards ceremony for the winners, in which the president of the Baiona club, José Luis Álvarez, participated; and Santos Almeida on behalf of MRW, sponsor of the competition.

The regional and provincial administrations were represented by the Xunta de Galicia’s General Secretary for Sport, José Ramón Lete Lasa, and the Pontevedra sports deputy, Gorka Gómez. The event was also attended by Mauro Olmedo, one of the sons of the former president of the MRCYB, Don Rafael Olmedo, to whom the competition was dedicated; and the secretary of the J80 class in Galicia, Luis de Mira, replacing the president of the Royal Galician Sailing Federation, Manuel Villaverde, who was unable to attend.

WINNERS OF THE MRW TROPHY