Countdown to the Count of Gondomar 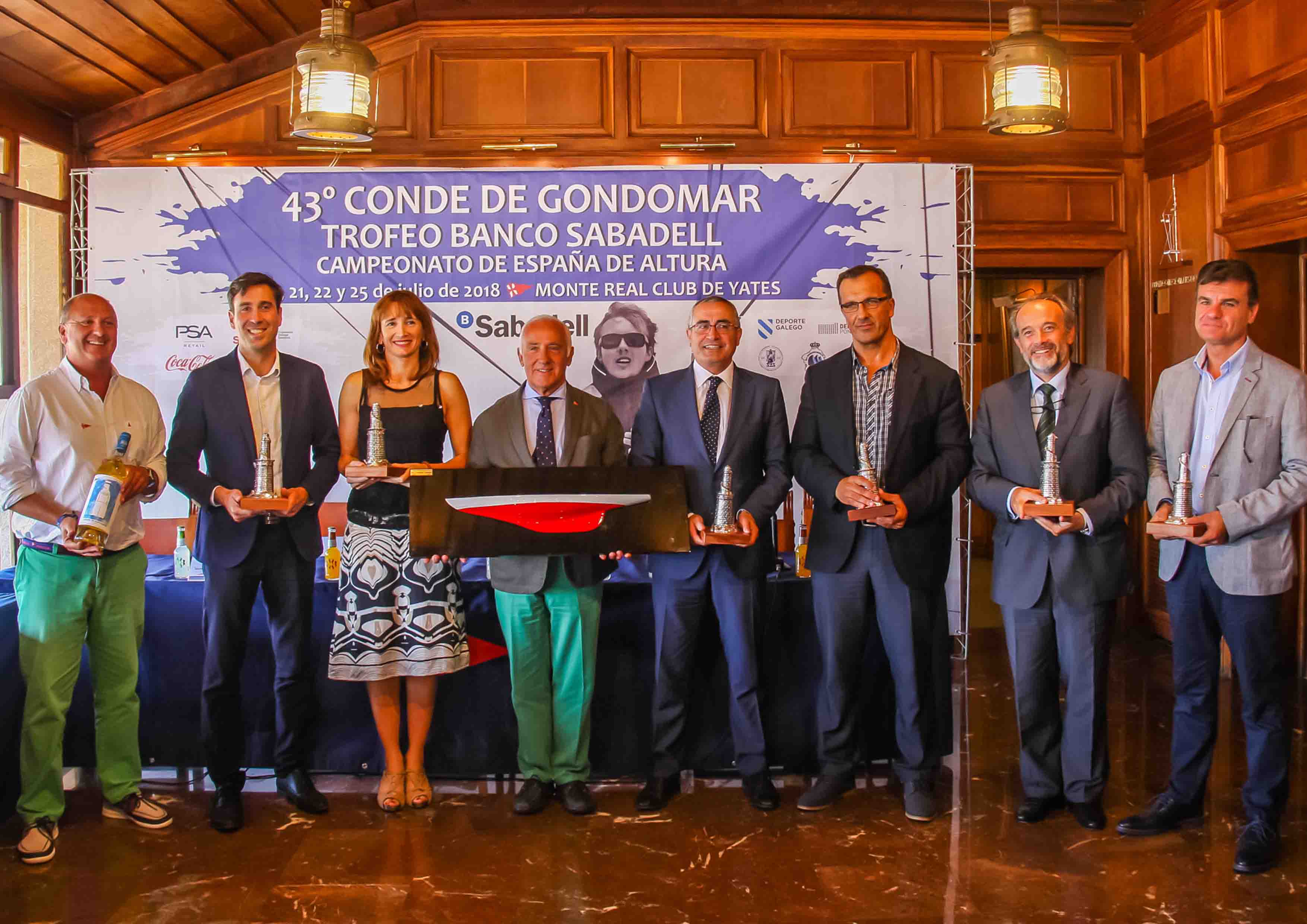 Held uninterruptedly since 1976, it is the deep-sea regatta par excellence in Galicia and one of the longest-running on the Spanish nautical scene.

· The program of the competition will include the mythical ascent to the Carrumeiro Chico of almost 100 miles, which will once again be the Spanish Height Championship

The countdown begins for the celebration of the forty-third edition of the Conde de Gondomar Trophy, which returns to Baiona for another year thanks to the Monte Real Yacht Club and Banco Sabadell.

The facilities of the Baiona club hosted this noon the presentation of what is considered by many to be the quintessential deep-sea regatta in Galicia and which is also one of the longest-running in the Spanish nautical scene, since it has been held without interruption since 1976.

Forty-three years after that first edition, the Count of Gondomar keeps its essence alive and hardly introduces changes in a program that has always guaranteed great success, both in terms of participation and entertainment.

There will be three days of championship, between July 21 and 25, in which the most outstanding sailing crews in Galicia will attend. In addition to the ORCs, divided into classes by competitive ability, we will once again see the J80 and Fígaros monotypes vying for the podium in real time.

The sports program varies depending on the classes, but all will combine cross-country events on the one hand, and more technical routes, from windward to leeward, on the other. The objective of this mixed program is that skippers and sailors can demonstrate their worth both in experience and expertise as well as in strategy and tactics.

As tradition marks, the ascent to Carrumeiro Chico, from the Bay of Baiona to the Corcubión estuary, will mark the beginning of the Count of Gondomar. A route close to 100 miles that is again, one more year, the Spanish Height Championship of the Galicia Zone. It will be played on Saturday 21 from 11 in the morning.

At the same time, a shorter distance race, reserved for smaller boats, will also start from the Bay of Baiona. In this case, the turning point to return to Baiona will be at the Camouco lighthouse, in the Ons island area.

The menu for Sunday, July 22, will be a cross-country regatta of about 20 miles in which only the ORC’s 4 and Open, J80s and Fígaros will participate, while the Carrumeiro crews, who will have finished the race at dawn, will be able to rest.

And for the last day, the July 25 holiday, the regatta committee has prepared two windward-leeward courses at the Cíes Islands anchorage. Starting at 12 noon, the adrenaline of the sticks will begin to put an end to a competition that will crown its winners that same afternoon, at five. 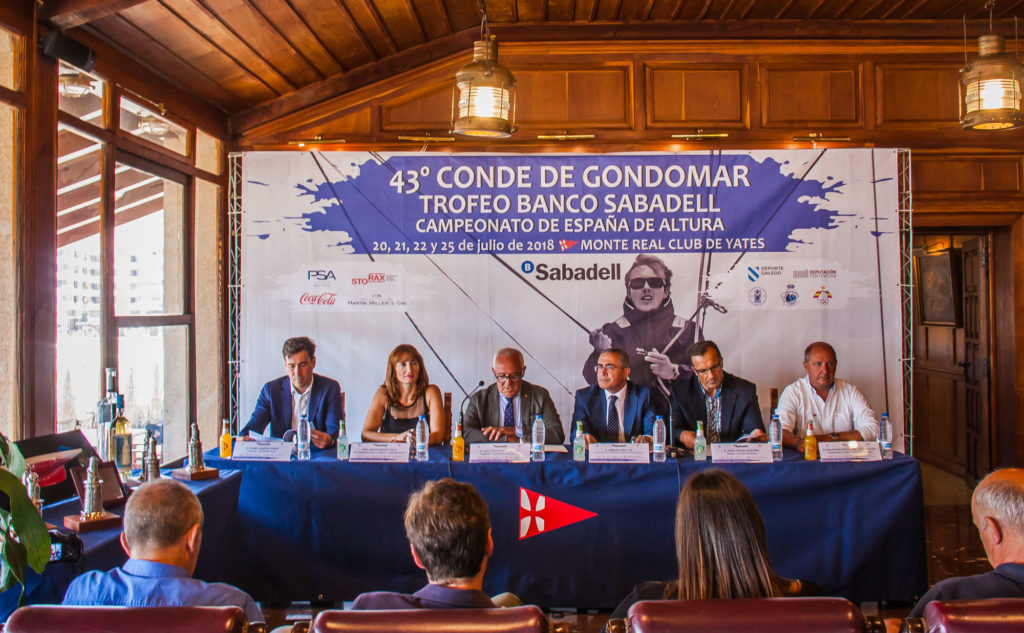 “Galicia, one of the best settings for sailing in Spain”

Authorities, sponsors, press and guests witnessed this morning the start of the 43rd Count of Gondomar – Banco Sabadell Trophy in its official presentation, held at the Monte Real Club de Yates. At the event, the president of the club, José Luis Álvarez, recalled the beginnings of a competition that was born in 1976 with the aim of becoming a reference event for deep-sea sailing in the Atlantic.

“43 years ago -said Álvarez- we gathered in Baiona the best crews of the time and this year we will do the same again without having changed hardly anything from the initial approach, which continues to be to make the sailors enjoy sailing in Galicia, one of the best settings for sailing in Spain”.

The Director of Collectives of Banco Sabadell, Manuel Prol, also influenced this idea, speaking of the Count of Gondomar as an event that “although it is eminently sporting, it transcends that area, becoming a social event” . “When we began our voyage with Monte Real, many years ago, -continued Prol – we did it with a vocation for permanence, as we like relationships with clients to be. We believe in projects that provide added value to the environment in which they are developed and this event is, without a doubt, an example of this”.

The General Secretary for Sport of the Xunta de Galicia, Marta Míguez, was in charge of closing the official presentation of the Count of Gondomar, with a speech in which she highlighted the long history of the competition, one of the longest in Spain. A fact, he said, that highlights the importance that sailing has in Galicia.

The mayor of Baiona, Ángel Rodal, the vice president of the Monte Real Yacht Club, Alejandro Retolaza, also participated in the official presentation of the event; and the manager of PSA Retail Vigo, Daniel Martín.

The 2018 Conde de Gondomar Trophy is organized by the Monte Real Yacht Club with the sponsorship of Banco Sabadell and the support of the Royal Spanish Sailing Federation and the Royal Galician Sailing Federation. PSA Retail Vigo, Ramada Storax, Martin Miller’s Gin and Coca Cola are the main collaborators. 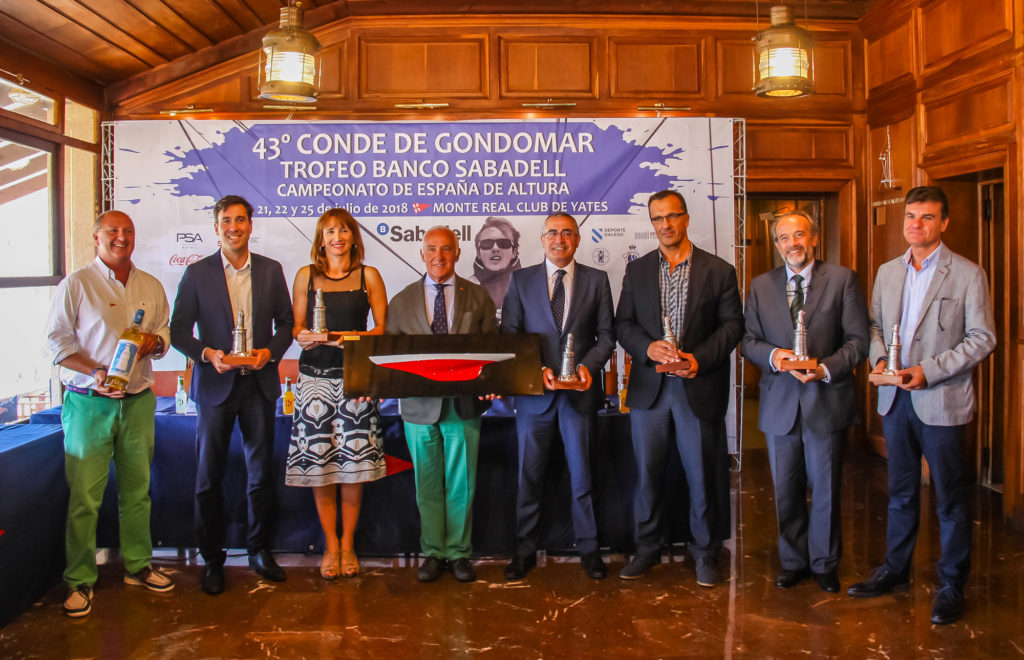 17:00
DELIVERY OF AWARDS at the Monte Real Yacht Club