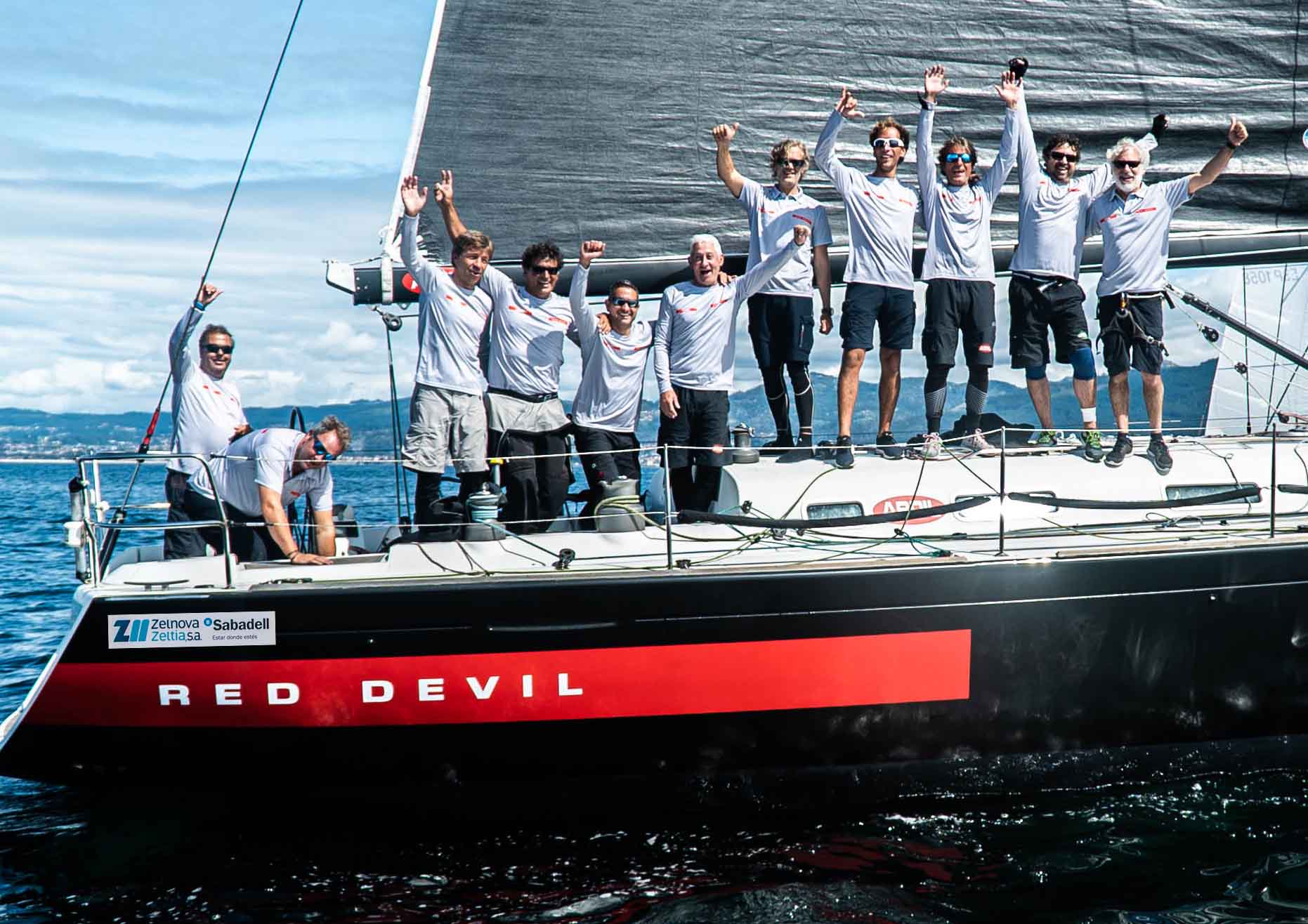 · The Real Club Náutico de Vigo signed fully in the competition with three boats on the podium of the Conde de Gondomar Trophy (Aceites Abril, Pairo Marnatura and Magical) and the real-time victory of Magical on the Carrumeiro climb

· The Deep Blue 2.1 revalidated the title of winner of the Erizana Trophy in the ORC class, in the Open it won the Ladeira and in J80 and Fígaros the victories went to Ifaclinic and Ladeira

· After the celebration of the Count of Gondomar, the Monte Real Yacht Club is now preparing for its next major competition: the Prince of Asturias Trophy to be held on September 3, 4 and 5

The Aceites Abril, skippered by Luis and Jorge Pérez Canal, won the forty-sixth edition of the Conde de Gondomar Trophy – Zelnova Zeltia Banco Sabadell Grand Prix after sealing a perfect weekend that allowed the Real Club Náutico de Vigo team to add their fifth victory in the emblematic regatta with an advantage of five points over the second classified.

The third and last day held this Sunday dawned grey, with some rain and hardly any wind both in the Bay of Baiona and in the regatta course located in front of the Cíes Islands. With a first postponement on land of up to two hours over the scheduled time -12 noon- the Regatta Committee made the decision to take the fleet out into the water after one in the afternoon with the aim of trying to complete at least one leg .

Finally, at the edge of the deadline and with about five knots of wind from the northwest, the participants heard the starting gun of the only windward-leeward format test that could be held. A regatta in which Eolo did not make it easy for the participants, with roles and a drop in intensity in the final stretch that forced the Committee to shorten the sleeve.

Among the ORC teams that competed for the Conde de Gondomar Trophy, the last regatta was awarded to Aceites Abril, who also won the great general victory, becoming the brand new winner of the event.

With this victory, the team led by brothers Luis and Jorge Pérez Canal now has a total of five wins at the Conde de Gondomar, beating Paz Andrade’s Ardora, Willy Alonso’s Castrosúa and Julio Martínez Gil’s Alaxe, and remaining just one title away from the team that holds the highest number of awards so far, José Luis Freire’s Pairo.

Behind Aceites Abril, second place went to José Luis Freire’s Pairo Marnatura, with the young Luis Bugallo at the controls; and the third position was taken by Julio Rodríguez’s Magical, who was also the real-time winner of the Carrumeiro stage. The boat from the Real Club Náutico de Vigo used a total of twelve hours and fifty-five minutes to cover the 94-mile route, remaining just over two minutes from the Pérez Canal after the compensation of times.

At the end of the test, Luis Pérez Canal was very happy with the victory. “My brother and I -he assured- We have been going up the Carrumeiro for 38 years with a crew of friends who have known each other forever. In fact, our team has been sailing together for an average of 30 years, which is a lifetime”. The Ourense patron highlighted the victory at the Conde as the first great victory of the season. “We are going to try to win all the races we can -he said- but the most important thing for us is to enjoy ourselves and have a good time” .

In the Erizana Trophy, in which the boats that did not go up to the Carrumeiro scored points, the second day caused a turnaround in the general with respect to the first stage. Vicente Cid’s Deep Blue 2.1 (RCN Vigo), who was second yesterday, scored a first today that allowed him to revalidate the ORC victory of the last edition. They were followed in the box by La Burla Negra by Juan José Martínez (CN Castrelo de Miño) in second position and Nahela by Víctor Manuel Álvarez in third place overall.

In the Open, Albarellos fell from the lead to second place in the table, giving victory to Ladeira de Elena Raga (MRCYB). Silleiro de Paula Rey (MRCYB) closed the podium.

Less things changed for the J80 monotypes, among which Joao Allen’s Ifaclinic (MRCYB) was the most outstanding and managed to proclaim itself the winner ahead of Juan Carlos Ameneiro’s Alboroto (MRCYB) and Juan Luis Tuero’s Luna Nueva, second and third respectively.

As for the Fígaros fleet, which also competed in the Open division, the best result was that of Ladeira, followed by Silleiro and Óscar Comesaña’s Bouvento, all representing Monte Real.

Lastly, within the Women’s Sailing project of the Baiona club to try to promote the role of women in the sport of sailing in Galicia, a prize was awarded to the best female crew in the competition, which went to Silleiro , led by Paula Rey.

With the day already finished, the gardens of Monte Real welcomed the delivery of trophies to the winners of the edition. Those in charge of distributing the awards were the president of the club, José Luis Álvarez; the Provincial Deputy for Sports, Gorka Gómez; the mayor of Baiona, Carlos Gómez; and the Regional Director of Southern Galicia of Banco Sabadell, Adolfo García-Ciaño; and the Marketing Director of Zelnova Zeltia, Adrián Salgado, sponsors of the event.

After putting an end to the competition, the Monte Real Club de Yates is now preparing for its other great event of the season, the Prince of Asturias Trophy, which will be held on September 3, 4 and 5. It will include, as usual, the Terras Gauda National Sailing Awards ceremony and, this year, the silver jubilee of the Ladies Cup, the women’s competition that celebrates its 25th anniversary.

>> IMAGES GALLERY ON THE WEB