These days we have celebrated a new edition of the Prince of Asturias Trophy, an event that we organize, one more year, together with the Naval Military School of Marín; and in this edition, with the sponsorship of Storax and Bodegas Terras Gauda and the collaboration of the Royal Spanish Sailing Federation and the Galician Sailing Federation. If you have missed it or want to relive it, know that you can do so through all the information published on our website and our Facebook page, the videos on our YouTube channel and the photos on our Flickr page.

This July we celebrate a new edition of one of our most classic regattas, the Conde de Gondomar Trophy, which celebrated its fortieth anniversary in 2015, sponsored by SabadellGallego and Storax. In this newsletter we talk about how the competition unfolded and we announce the club’s next sporting event, the Prince of Asturias Trophy, which is also celebrating its anniversary this year. We also tell you that next September we will organize the I Solidarity Vertiathlon of Baiona.

His Majesty the King inaugurated in Baiona the photographic exhibition ” Monte Real Yacht Club: 50 years of history “, which summarizes with images the half century of life of the historic Baiona club. This is the first visit of Don Felipe as King of Spain to the Monte Real Yacht Club, of which he has been Honorary President since 1986, when he participated as a sailor in the first edition of the Prince of Asturias Trophy.

This summer we have prepared an extensive program of activities so that you can enjoy sailing around the bay of Baiona. For the little ones we have a Nautical Camp and weekly light sailing courses. For the older ones, cruising sailing courses. And for everyone, Getaways to the Cíes Islands and Sunsets on a sailboat. With this special newsletter we want to let you know all our proposals and invite you to participate in them to live a different summer in our club.

This June we have welcomed the summer by organizing the Spanish Championship of the 2.4mR Class and the Galician Championship of Solitaires and Two. We have also celebrated the closing ceremony of the 2014-2015 Course of our Adapted Sailing School for people with disabilities, which has been attended by numerous authorities who support our initiative to bring the world of the sea closer to everyone equally.

This May, hand in hand with Baitra, we celebrate the Children’s Sailing Trophy and the Galicia Cup of the 420 Class. May was also the month of a new adapted sailing course, and the signing of the correspondence agreement with the Clube Naval de Cascais, which we hope will help boost international tourism and organize new sports competitions.

Last April we began by celebrating the Rías Baixas Tourism Trophy – Winter Regatta, in which Luis Manuel García’s Unus emerged as the absolute winner. We continue with the Repsol Trophy – Spring Regatta, in which Rui Ramada’s Fifty won for the second consecutive year. And the next appointment is the Baitra Children’s Sailing Trophy.

This month of March, which is about to end, has been, without a doubt, a very special month at the club. In addition to reaching the magical date of March 24, which marked our 50th anniversary, we have housed a historic ship in our facilities, the replica of the Nao Victoria, known for being the first to go around the world between 1519 and 1522.

In this new edition of El Pañol del Monte Real we bring you an Easter Special with a whole series of proposals so that you can enjoy your holidays at sea. Have you already thought about how to spend these holidays? If you do not know very well what to do and you want to disconnect from work and obligations sailing on a sailboat, we have what you need. Just tell us what you want, and we will make it happen.

It is a day of mourning and deep regret at the Monte Real Club de Yates for the death, at the age of 99, of Don Rafael Olmedo Limeses, president of the club for the last 40 years. Defined by many as an extremely polite, humble, affectionate and attentive person, the farewell to Don Rafael marks the disappearance of an exemplary leader, under whose presidency, Monte Real became one of the most prestigious international nautical organizations, an indisputable benchmark in the world of sailing.

The Monte Real Club de Yates Sailing School has had, during this month of February, an indisputable role thanks to the great successes achieved by our athletes. Two of our students have been awarded as Best Athletes of the Year at the IV Sports Gala, and one of our little ones was fifth in the Galician Optimist Championship. TO

We are making a strong start to a year that will be very special for the club, because we are celebrating 50 years of existence and because two of our most emblematic regattas – the Príncipe de Asturias Trophy and the Conde de Gondomar Trophy – are also anniversaries. It will be a year of surprises and special events, but we do not forget our traditional appointments with regattas, which we have already marked on the calendar and in which, once again, we invite you to participate. 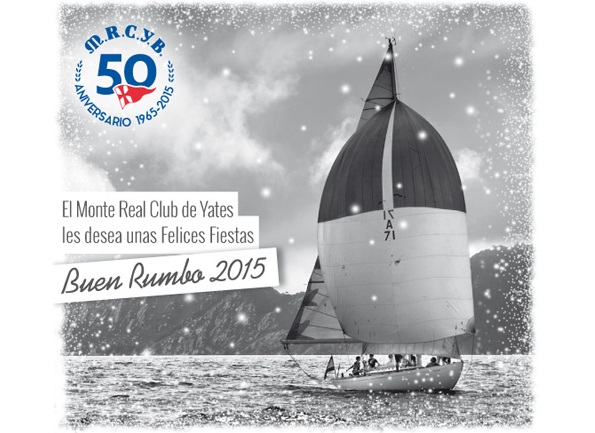 Happy Holidays to all!

This November we have hosted the Spanish Cruise Championship, organized the Autumn Trophy for the J80 class, participated in the Vigo Atlantic Week and traveled to Porto with some of the boys and girls from our Sailing School.

In this newsletter we offer you the opportunity to learn more about the work we do at our Sailing School, and to do so through the reflections of some of its protagonists. You can read an article in which the club’s commodore, Miguel Lago, delves into the present and future of sailing; and another in which the school’s coordinator, Carlos Rúa, tells us about the challenge of bringing sailing closer to everyone. In addition, some of the coaches delve into different types of sailing that can be practiced in the club. We hope you find it interesting.

Although we have not stopped all summer, with the arrival of autumn Monte Real resumes many of the activities of the Sailing School. We are starting a new dinghy sailing season, we are launching new cruising courses and we are once again organizing outings to the sea with disabled people. Over the years, the club’s Sailing School has been gaining momentum and the expectations for this new stage are great. The goal remains the same, to bring the world of sailing closer to the greatest number of people. The motto “Sailing for all” makes it very clear.

These days we are celebrating a new edition of the Prince of Asturias Trophy, an event that the Monte Real Yacht Club organized together with the Naval Military School of Marín, with the collaboration of the Royal Spanish Sailing Federation and the Galician Sailing Federation. If you want to relive it, know that you can do it through the videos on our YouTube channel and the photos on our Flickr page.

One of the most important events on the calendar of the Monte Real Yacht Club is drawing near, the Prince of Asturias Trophy, which in 2014 is held between 5 and 7 September. It is one of the most important regattas in the nautical calendar, in which numerous crews, both national and foreign, are expected to participate. As we prepare for the Prince of Asturias, we take stock of what has happened over the last month.