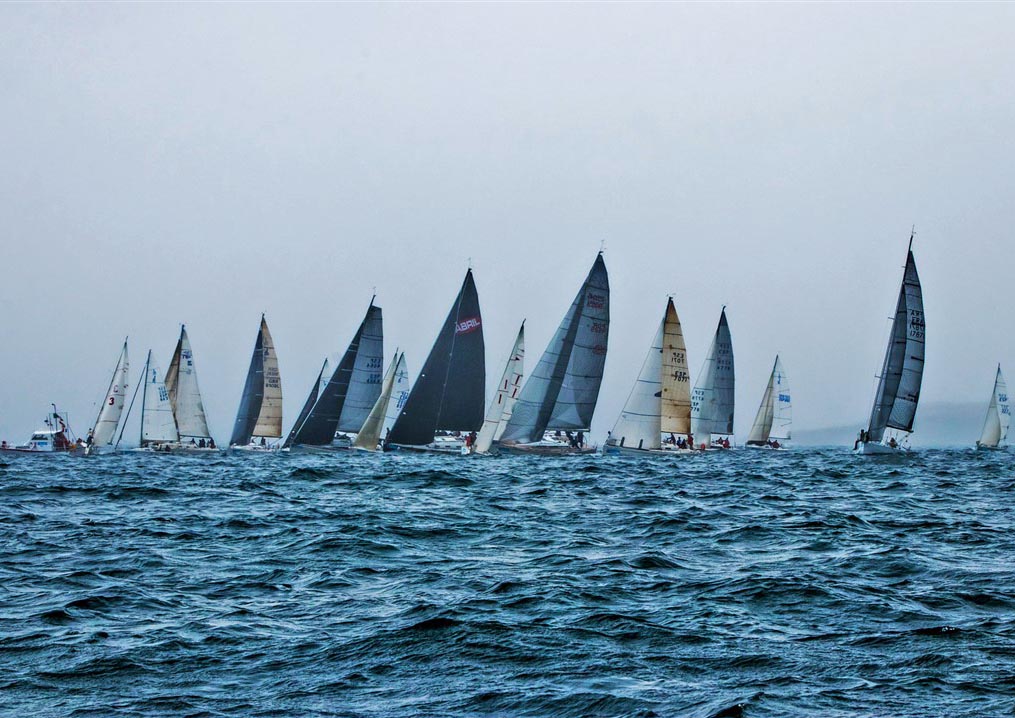 The PSA RETAIL ORC 4-5, RÍAS BAIXAS J80 and MARTIN MILLER FÍGARO classes were in charge of inaugurating this Thursday, the great day of the Apostle, the classification of the 44th Count of Gondomar – Banco Sabadell Trophy, which is being held these days in Galicia under the organization of the Monte Real Yacht Club of Baiona.

With the big boats disputing the stage – still to be finished – of almost 100 miles to the Carrumeiro Chico, in Corcubión, the trophy markers opened with the scores of the ORC 4-5 and one-designs, which completed a coastal crossing of almost 30 miles from Baiona to the Camouco lighthouse, near Ons, and return to the end of the test located on the southern island of Cíes.

Wearing a pendant from the Monte Real Club de Yates, the Unus of the Luis García Trigo, was the winner of the day in the PSA RETAIL ORC 4-5 class, after signing a time of 5 hours and 19 minutes in the 29.6 miles in dispute . The boat of the organizing club surpassed La Burla Negra of Juan José Martínez Silva, of the Club Náutico Castrelo do Miño; and the Balea Dous of Luis Pérez, of the Real Club Náutico de Rodeira; two great crews, also aspiring to the final victory of the class, who had to settle for second and third position in the stage.

A stage that was somewhat complicated by the weather, which marked the crossing of the sailboats making the departure difficult with showers and fog, complicating the passage through Carallones with some waves and slowing them down with some calm in the vicinity of the Cíes Islands. In spite of everything, the wind from the south, with an average speed of 12 knots, propelled the sailboats as far as Camouco, allowing them to reach it in less than three hours.

The first boat to double it was Juan Luis Tuero’s Luna Nueva, undoubtedly the best of the entire 8 meter fleet in the RÍAS BAIXAS J80 class. With his usual crew, the Spaniard completed a very good regatta, staying in the lead throughout the course and taking the first ballots for the grand final prize. He prevailed over José Luis Pérez’s Maija, also from Monte Real, who took six minutes; and Bernardo Macedo’s Mondo, who occupies third place on the provisional podium.

In the MARTIN MILLER FÍGARO class, also scored in real time, the Bouvento, skippered by Fernando Rey, won the regatta of the day, a race that finished under six hours. They lead the provisional classification followed by Genoveva Pereiro’s Ladeira, who crossed the finish line a quarter of an hour after the first; and Víctor Fernández’s Tutatis, which took 6 hours and 25 minutes to complete.

After the first test concluded in the water, a seafood dinner courtesy of the Monte Real Yacht Club and a tasting of Martin Miller’s Gin and Royal Bliss gin and tonics put an end to the opening day of the Count of Gondomar for the Rías Baixas classes J80 and Martin Miller Figaro.

In the STORAX ORC 1-2-3 competition, which brings together the big boats, the crews continue at this time their particular battle for the feat of the Carrumeiro Chico, the great test of the Count of Gondomar, with almost 100 miles of course.

The Yess Too, owned by the Portuguese Rui Ramada, was the first ship to reach the area known as the Greek Cemetery and turn around the mythical lighthouse at 18:59, after 8 hours of sailing. He still has several more hours ahead of him until he crosses the finish line.

The Aceites Abril, owned by the Pérez Canal brothers, and the Pairo 8, skippered by Luis Bugallo, have stayed close to the Portuguese boat throughout the race and very close to each other, making it clear that they want to win the mythical race once times are compensated.

The Bon III, with Victor Carrión at the helm, is another one that is going strong in the competition, in the wake of the first three without ever distancing themselves too much.

Once the long journey is over, the Monte Real Yacht Club will offer the crews the now traditional eggs with chorizo and broth, so that the sailors can regain strength after the arduous effort of one of the toughest events on the Spanish nautical calendar.

The competition resumes on Saturday 27

After a well-deserved day of rest for the Carrumeiro sailboats, the 44th Count of Gondomar – Banco Sabadell Trophy resumes on Saturday 27 with the celebration of the second day starting at noon. The test in dispute will be, on this occasion, a route of about 32 miles surrounding the island of Ons.

There will still be two more tests for the end of the competition, of the windward leeward type, scheduled for Sunday from noon at the Cíes Islands anchorage. It will be then when the trophy program is completed, revealing the configuration of the winners’ podium.

>> The class competes in the ascent to Carrumeiro Chico and the classification will be known at dawn, once the test is over.