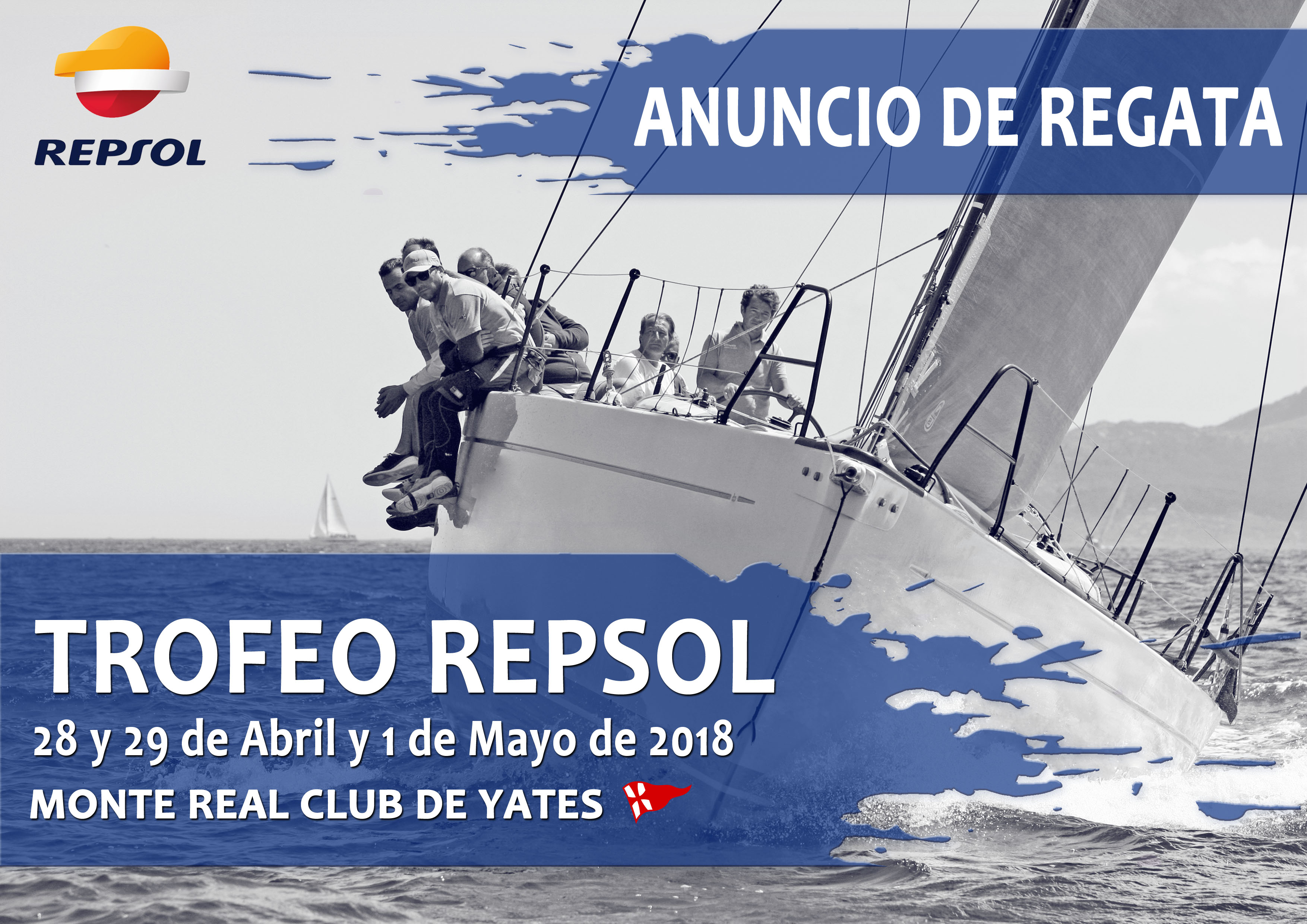 The REPSOL Trophy – Spring Regatta will be organized by the Monte Real Yacht Club (MRCYB) with the sponsorship of REPSOL. This regatta will be the first scoring for the Rías Baixas Circuit of Cruceros A DOS.

The Regatta will be held in accordance with the provisions in force of the following regulations:

a) The “rules” as defined in the World Sailing Racing Rules of Sailing 2017 – 2020 (RRS).
b) The 2018 Cruise Technical Regulation and its annexes (RTC).
c) Respective regulations with the adaptations made by the MRCYB for this regatta, for the J70 and Figaro one-design classes.
d) The IMS and ORC 2018 Regulations.
e) World Sailing Special Rules for Offshore Regattas, Category 4 (ORC).
f) This Announcement of Race.
g) The Sailing Instructions that may modify any of the previous sections.

Participation in this regatta is limited to boats with an ORC International or Club certificate valid for 2018, whose GPH is less than 770 s/mile, as well as the J70 and Figaro monotypes.

Groups and Classes:
An ORC group is established that will be divided into classes, as well as those of the different monotypes:

(*) In ORC Cruise and A Dos, in view of the registrations made and as soon as their effective participation in the regatta is verified, the Regatta Committee and Organizing Committee will establish the classes and their cuts seeking the greatest equity possible, not admitting claims in this regard.

(**) In the Special Open Class, only boats that are genuinely Without Level will be admitted in the class that are Cruisers and that do not have a minimum competitive capacity despite their size and GPH, as well as especially slow designs, very old, etc.

– In any case, the Regatta Committee and the Organizing Committee of the regatta will have the power to include, at their discretion, in the Open Class the boats they deem appropriate, not admitting claims in this regard.

(***) The Figaros, if they do not achieve the minimum number of 3 to compete as a one design, will race in ORC Cruise with an estimated GPH, no claims being accepted in this regard.

Monotypes will classify only in their class.

Participants must comply with the eligibility conditions reflected in Regulation 19 of World Sailing and the prescriptions of the Royal Spanish Sailing Federation related to said regulation.

Participants of nationality or legal residence in Spain must be in possession of the sports federation license for 2018.

Participants may display advertising in accordance with the provisions of World Sailing Regulation 20 and the FGVELA Advertising and Competition Regulations.

Pursuant to World Sailing Regulation 20, participants may be required to display advertising on the forward 20% of the hull on each side of the boat (in J70 it will be specified in particular) and on the sides of the boom, as well as possible advertising pennants on the backstay of each boat. All this would be provided at the MRCYB race office once your registration is confirmed.

Modifications to the stickers provided by the organizing committee are not allowed. Violation of this IR will entail a penalty of 2 places in the test.

The Monte Real Club de Yates reserves the right to demand the elimination or substitution of any type of advertising, message or image displayed during the celebration of the event of the boats or the equipment of their crew members, which does not comply with the moral and ethical standards of general acceptance (Regulation 20 of the World Sailing) or contravene the interests of the organizing club. This includes holding races on the regatta course, at the club’s facilities or while at the regatta committee’s disposal.

The owner or skipper of the boat with advertising will be asked to indicate or show the type of advertising that will be displayed during the celebration of the regatta, for the approval of the organizing committee.

The participating owners and crews grant their authorization to the MRCYB so that any photograph, image or video of people or boats taken during the days of the regatta may be published in any medium, such as television advertisements, editorial comments, information, advertising etc.

Entries will necessarily be formalized on the official form (it accompanies this document and/or is available at www.mrcyb.es).
The registration fees will be as follows:

(*) The 50% bonus will be applied only to those who have also participated in the COMUNICA TROPHY – Winter Regatta.

In addition, every boat participating in each and every one of the following regattas:

You will get free registration for the 33rd Prince of Asturias Trophy.

The registration rights must be made effective by means of a nominative check in the name of the Monte Real Club de Yates, transfer or payment made in the current account indicated below (indicating the name of the boat):

To be accepted, an application for registration must be submitted or submitted with the following documentation:

• Registration form duly completed and signed.
• Photocopy of the updated licenses of all the crew members of the ship.
• Valid ORC measurement certificate (ORC fleet only).
• Class Association annual fee payment certificate (J70).
• Photocopy of civil liability insurance and damage to third parties for a minimum coverage of €336,556 and coverage for all crew members on board, and policy extension for participation in non-professional regattas.
• List of security elements (depending on whether ORC or monotype) duly covered and signed.

The application for registration must have the approval of the Organizing Committee of the Monte Real Club de Yates.

The documents will be sent or presented by hand within the predetermined period in:

The documents for registration are available on our website: www.mrcyb.es

Registration of participants:
Each owner or skipper must register and personally sign the registration form at the MRCYB Regatta Office before 12:30 p.m. on April 28, 2018.

Admission of Participants:
The registration of a boat will not be accepted if, before the time indicated in section 7.8, it does not present the documents specified in 7.4 at the Regatta Office or does not have the approval of the Organizing Committee. 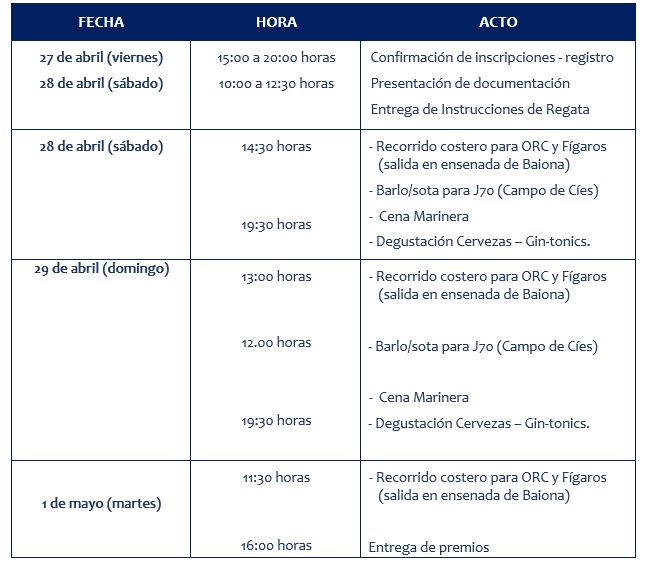 On Tuesday, May 1, there will be no departure for ORC and Fígaros later than 2:00 p.m., except if it is as a result of a general call.

A maximum of 3 tests are scheduled for ORC and Figaros, as well as 6 for J70. The regatta will be valid when at least one test has been held and scored.

In J70 a maximum of 4 tests per day is established.

The Sailing Instructions may introduce variations in the routes or in the planned program according to the circumstances that occur, mainly meteorological.

Measurements and daily checks of certificates and safety may be carried out by the measurement committee on regatta days.

The Low Score System Appendix A4 of the RRV will apply.

Only the worst disposable score of the class that has closed 4 or more valid tests can be discarded.

ORC rankings will be established according to one of the following compensation systems:

a) Composite route, and if not possible,

1) Applying the values specified in each certificate for Ocean PCS if the wind is stable.
2) Offshore OSN if there are large roles and oscillations in wind intensity.
All this always at the discretion of the regatta official, not admitting claims in this regard.
And for A Dos, always OSN applying its double handed section of the certificate

Class classifications will be established (provided that the provisions of points 4.2. and 4.3 are met).

Monotype classes will only qualify in real time.

The safety of the regatta is considered as Category 4, in accordance with the Special Rules of Regatta of the World Sailing (for one designs they will be specific to them).

The participants undertake to carry on board, under their responsibility, the updated regulatory documentation of the vessel, as well as the appropriate qualification for the management of the vessel and the navigation to be carried out.

The list of prizes will be exposed in the TOA in view of the participants and registered, before the start of the 1st test.

The boats formally registered in this regatta that do not belong to the MRCYB fleet, will have a free mooring or anchoring place (mooring under the exclusive responsibility of the owner or skipper) reserved in the MRCYB during the regatta days and until Saturday 5 may.

The Race Committee will use Channel 72 VHF for its communications during the events.

The awards ceremony will take place on the terrace of the MRCYB once the general classifications of the tests have been published on May 1, 2018 (approximately 4:00 p.m.).

All boats participating in the regatta do so at their own risk and responsibility.

The Monte Real Club de Yates, the organizing authority or any other person or body involved in the organization of the event, rejects any responsibility for loss, damage, injury or inconvenience that may occur to people or things, both on land and at sea, as consequence of participating in the tests covered by this Notice of Race.

Attention is drawn to the Fundamental Rule 4 DECISION TO RACE in part 1 of the RRS which states: