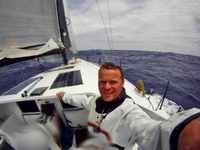 Alex Pella is one of the best sailors of his generation. There are those who say that he learned to navigate even before he learned to walk, and that the blue of his eyes has a bit of the blue of all the seas in the world through which he has sailed, which are not few. Born into a family of professional sailors, he has spent practically all his life on a boat. He has sailed around the world on a sailboat and crossed the Atlantic up to fifteen times. He accumulates trophies of all kinds, but he still aspires to achieve one of the ones he most desires, the Vendée Globe, a solo round-the-world trip without stops or assistance. Quite a sporting challenge, of overcoming and survival for which the “Diable Espagnol” has been preparing for years.

Ocean sailor, solo sailor, Diable Espagnol , lover of the sea and adventure… Who is Alex Pella and how do you like to be defined?

Well, honestly, it’s hard to define oneself… But I think there’s a bit of all that. I like the sea, ocean regattas, and I am passionate about solo sailing.

The “Diable Español” thing came during my stage in the Mini 650 Class, when I got two podiums and a stage victory in the mythical Mini-Transat. I think that today I am still the only non-French person with those results and the truth is that when they remind me of the “Diable Español” it brings back very good memories. I hope to repeat that this year on the “Route du Rhum” and get to Guadeloupe as soon as possible.

You were born into a family of sailors, in which practically everyone is related in one way or another to the world of sailing, how has this reality influenced your qualities as a sailor?

In almost all. In my house everyone surfs. Neither my brothers nor I have any knowledge of when we started sailing. For my parents, the normal thing is to go out to sea as a family and spend weekends and summer vacations on board the family boat.

Later, with my brothers, when we grew up, we began to join professional regatta teams, almost always due to our qualities of ” handymen ” and ” good sailors ” rather than great sailors. And there we began to train, first technically and then, as soon as the opportunity arose, sportingly. So my training is more like a “ shipyard ” than a “ high performance center ”.

In the Mini 650 stage, due to the lack of means, you rely a lot on family and friends. Now over time I realize that I was lucky to have a fantastic environment in that sense. It is clear that I would never have achieved anything alone, without the help and experience of my brothers David, Borja, and Nacho. Our friend Luis Guervós is also very much to blame for this and it was lucky to be able to count on him all those years.

2013 was, without a doubt, a great year for you. First place in the Tour of Europe regatta “ Route des Princes ” and second place in the Transoceanic regatta “ Transat Jacques Vabre ”. How do you rate these successes?

Last year was fantastic. I was a member of the French team of the Maxi-Trimaran ” Prince de Bretagne 80 “. I had never sailed in these fantastic boats before, and sailing at almost 30 knots averages over 24 hours on the open sea is amazing. The way of sailing these ships is absolutely different from all the ships in which I had sailed before.

Also, sharing a team with people like Lionel Lemonchois, Fred Le Petrec and Jean luc Nelias is a real luxury. I have to especially thank Lionel for calling me and giving me that opportunity, because it is very difficult for a Spaniard to become part of a crew in an oceanic Maxi-Trimaran.

Then jump to the ” TALES II “, a Class 40 entirely Spanish and of an extraordinary level. Armed by Gonzalo Botín, designed by his brother Marcelino, built by Ximo Lopez, and with the technical and sports management of Antonio Piris…almost nothing! We ran the Transat Jacques Vabre with Pablo Santurde with great success, and despite our stop in Coruña to repair our battered rudders, we managed to finish second, in the first year of the boat.

I think I can say that we were the sensation of the regatta. In Itají, port of arrival, all the best ocean racers passed by the boat, asking to visit it and asking all kinds of questions about the design, construction, driving and trim modes… A total success. I think that never before has a 100 percent Spanish boat made up entirely of Spaniards reached so high in a regatta of this type, almost always dominated by the French and English.

Everyone knows you for your facet as a navigator, but the truth is that you also did your first steps in the world of cinema, as a skipper and advisor on maneuvering and navigation issues on the Imoca 60, where some of the sequences of the film “In lonely”. How do you rate your cinematographic experience? Would you like to repeat?

For me it was a surprise and an honor that a Spaniard was called to take all the maritime themes and skipper the boat in a film about the Solo Round the World regatta “ Vendée Globe ”. It was undoubtedly an incredible experience, different from anything I had been doing in recent years, and very enriching.

I was working on this project for six very intense months, with great pressure and responsibility. You only have to watch the videos of the making of that are on YouTube to assess what that shooting was like. 50 days at sea, with 9 hours on the water each day, and with 18 crew members with all their work material on a boat designed for solo sailing. Now that was an adventure!

These super productions (17 million euros) require a very tight schedule, and at sea what rules are the weather conditions and the skipper of the boat, which in this case was me. That meant that I had a lot of responsibility for the safety and viability of the project.

I was very lucky because Jean Cottin, the producer, and François Cluzet, the main actor, fully trusted me when it came to making decisions and how far to push the limits of filming. It was honestly a great experience, but I don’t know if I would repeat it.

Returning to competitive sailing, among your next challenges is the tenth edition of the Rum Route, a solo transatlantic crossing of more than 3,500 miles. How does one prepare physically and psychologically to participate in a test of this type?

Physically the fitter I am the better, what happens is that due to the lack of means I don’t have a complete team and I have to do a little of everything. Sailing to understand the boat, to know where the limits are, and to know a little about everything, electronics, computers, ropes, sails, composite, energy…because then in the regatta I am completely alone and I have to know how to handle myself in any situation.

The truth is that I try to stay in shape, living a healthy life and aerobic exercise a day. I go for a run, or to the gym, or take out the windsurf board. The latter is obviously what I like the most. Psychologically, the same. Ideally, go out to these regattas rested, and with your homework done.

I am also motivated by thinking that it may be the last regatta I will do, due to the difficulty of finding resources to prepare at this level. We are talking about trying to win regattas historically dominated by the French and English, and doing it from Spain.

The Rum Route is your next big date with the regattas, but you will already have your sights set on the Vendée Globe 2016-2017, one of your dreams since you were a child. Do you think it is possible to participate in that edition? How’s the sponsorship thing going?

For the next edition I am, at the moment, pre-registered. I need to find sponsors and I’m working on it. This is undoubtedly the most difficult task for me. And I know that the moment is not right, but I’m going step by step. Now, for now, I have the Route du Rhum in front of me, and I’m going to try to go for it.

Next September you will collect in Baiona the award for Best Oceanic Sailor 2013 within the framework of the Terras Gauda National Sailing Awards organized by the Monte Real Yacht Club. What does this recognition mean to you?

It is very nice for me to collect this award again. I was named “ Best Sailor of the year 2003 ” for my podium finish in the mythical Mini-Transat in my first participation, which was also the first podium finish for Spain in a Solo Transoceanic regatta.

Now, to receive this award from the Monte Real Club de Yates again, 10 years later, is a pride and an honor, for everything I have lived and sailed these years. I sincerely have to thank Monte Real and everyone who has supported me during these years in my career.

A book… “Cañamin, an unexpected journey”

An album or song… “Valiente”, by Vetusta Morla

An unforgettable memory… The beginning of my sports career, in the Mini Class, with my brothers, friends. It is a class where camaraderie and the marine environment reign.

A scary moment… In my first big transoceanic race, running third, I almost lost my mast 200 miles from the finish…it was horrible.

A boat… The “Pepus IV”, a puma 34 from 1976, in which we spent the summer vacations and ran the club regattas with my parents and brothers.

A place to sail… Sariera, a cove in Begur, on the Costa Brava. It is our summer town and we sailed in everything that floats! Optimist (cruise version, with oars, fishing equipment…), windsurfing, Catalan skate, hobbie cat…

A place to anchor… Cala Tuent, on the north coast of Mallorca, between Sóller and Cabo Formentor. It was our beginning and end of vacation aboard the “ Pepus IV ”, and a bit of a secret corner in the seventies and eighties.

A feeling in the sea… Feeling the water pass under your feet… and a feeling of freedom.

It is an interview with Rosana Calvo. The photograph is by Alex Pella (selfie between Azores and Fisterra).